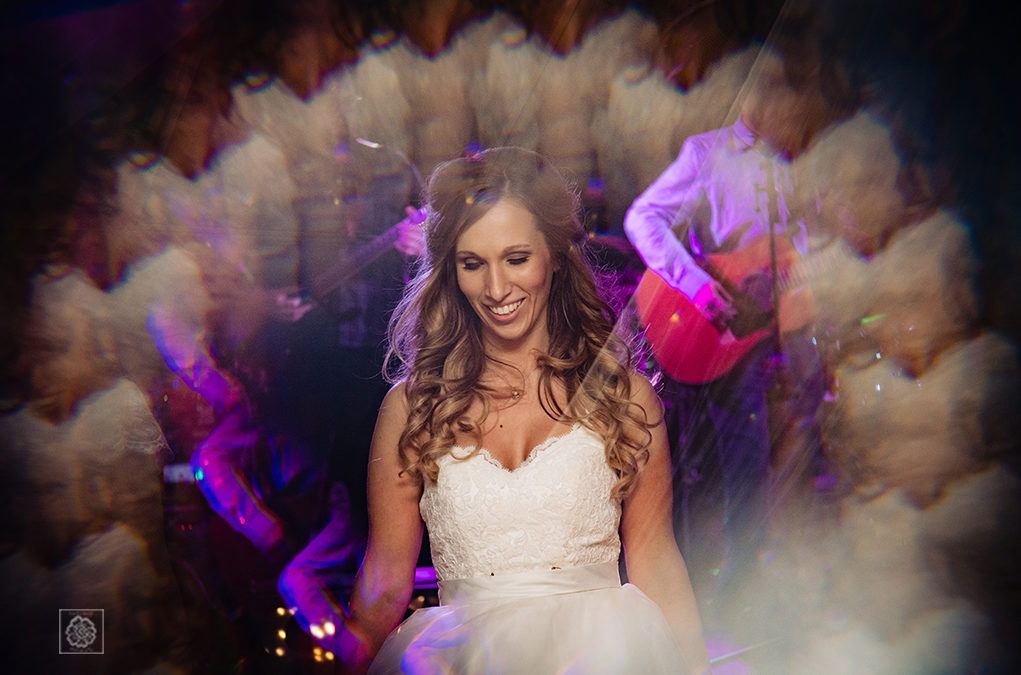 Wedding Photography in St. Louis! We love photographing weddings outside of our home city of Washington, DC! Because we spent many years traveling and living abroad in our previous careers, we always enjoy the opportunity to see new places and experience new things. That is why we have jumped at the chance to help couples document their nuptials in locations. Some close to home as North Carolina, Philadelphia and Northern New Jersey. And others as far abroad as the Dominican Republic, India, Germany.

Photographing Julie and Adam’s marriage celebrations took us to a place we had never been before — an area in Southern Illinois just outside St. Louis, Missouri. Both the bride and groom had grown up in the St. Louis metropolitan area’s Metro East region, which comprises the suburban towns on the Illinois side of the Mississippi River. They and their families still reside in the region, so having their wedding close to home was a perfect fit for everyone.

Julie and Adam tied the knot in a lovely church in St. Rose, Illinois, a town about a dozen miles from the houses in Highland, Illinois, where they put on their wedding dress and tuxedo, respectively. Their Catholic ceremony was full of emotion and special moments, because the bride recently converted to the faith of her husband-to-be. As we took pictures of the two of them performing the various rituals that are part of a traditional Catholic wedding, we could see how much every part of the ceremony meant to her and how holy she considered the exchange of vows to be.

After the appropriate solemnity of the wedding ceremony, the bride, groom, their bridesmaids and their groomsmen were clearly ready to start celebrating the couple having exchanged their vows. Some of our favorite images of the day came while the wedding party rode around the area in the “party bus” the newlyweds had rented for the day. With the serious part of the marriage celebrations out of the way, the group blasted some music, indulged in a few of the St. Louis area’s most famous beers and danced around the inside of the bus.

The party bus’s first destination was Southern Illinois University Edwardsville, a higher educational institution located about 20 miles from downtown St. Louis and the place where Julie and Adam’s love story began. They met as undergraduates in the university’s engineering school, and even though Julie switched majors, studying education and eventually becoming a teacher, they stayed together even after graduating and eventually made it to the altar.

Because the memories of their time when their relationship began were so special to the newly married couple, they wanted to make sure that Southern Illinois University Edwardsville’s campus played a role in their nuptials as well. After the wedding party disembarked from the bus, we took a series of pictures of the bride and groom posing with their bridesmaids and groomsmen — each of whom, in their own way, was an integral part of their love story as well.

After capturing some really fun (and funny!) pictures of the new husband and wife goofing around with their wedding party, we sent the bridesmaids and groomsmen back to the party bus to continue their celebration and took the newlyweds for a little walk around Southern Illinois University Edwardsville to get some couples portraits of them.

We had initially intended to explore the entire university grounds, but the area around the entrance was so beautiful and so full of lovely spots in which to pose the happy couple that we never made it to any other part of the campus. We started by having them climb a small hill, the sides of which were covered with yellow daffodils in the full bloom of spring. After getting some colorful photos of them embracing there, we asked them to pull the bride’s veil over both of their heads so that we could capture them on film sharing a “private” kiss.

Their couples portraits got even more dramatic after that, as we took them to some beautiful cherry blossom trees ringing a central courtyard. Working as wedding photographers in Washington, DC, (a city famous around the world for its cherry blossoms) has given us an appreciation for how good brides and grooms can look when surrounded by those distinctive white and pink flowers. We got some absolutely stunning and intimate images of the newlyweds holding one another amid the branches.

Before heading back to Highland for Julie and Adam’s reception, we asked them to do one last thing. It was a little unusual but was sure to result in some magical photographs. We had the bride and groom lie down in the middle of a brick ellipse in the aforementioned central courtyard while we flew our DJI Mavic Pro drone above them. We then took some unforgettable aerial pictures of them framed perfectly by shape of the oval and the brick paths radiating out from it like spokes.

The wedding reception took place at the Knights of Columbus hall in Highland, which had been decorated so exquisitely that several wedding guests independently mentioned to us how beautiful it looked. Julie and Adam put their own stamp on the post-ceremony party by changing up the traditional order of events. After they, their bridesmaids and their groomsmen made suitably goofy and celebratory entrances, the newlyweds went straight to their cake to do the ceremonial cutting. Following that, the wedding party sat down to hear the best man and maid of honor (the groom’s twin brother and the bride’s sister, respectively) give two of the least conventional and funniest speeches that we have ever heard at a wedding reception.

Following a delicious meal catered by Femas, the groom led his mother out onto the dance floor for the touching spin around the room. Then Julie took her turn, dancing sweetly with her dad. The father of the bride then ceded the floor to the new most important man in his daughter’s life so that the newlyweds could share their first dance.

Julie and Adam’s wedding day concluded with some raucous dancing to the music cranked out by Black Top Boulevard, a local band that got almost everyone at the wedding out onto the floor. The bridesmaids and groomsmen led the way, goofing around, getting crazy and generally showing the same fun-loving spirit that they had on the party bus. 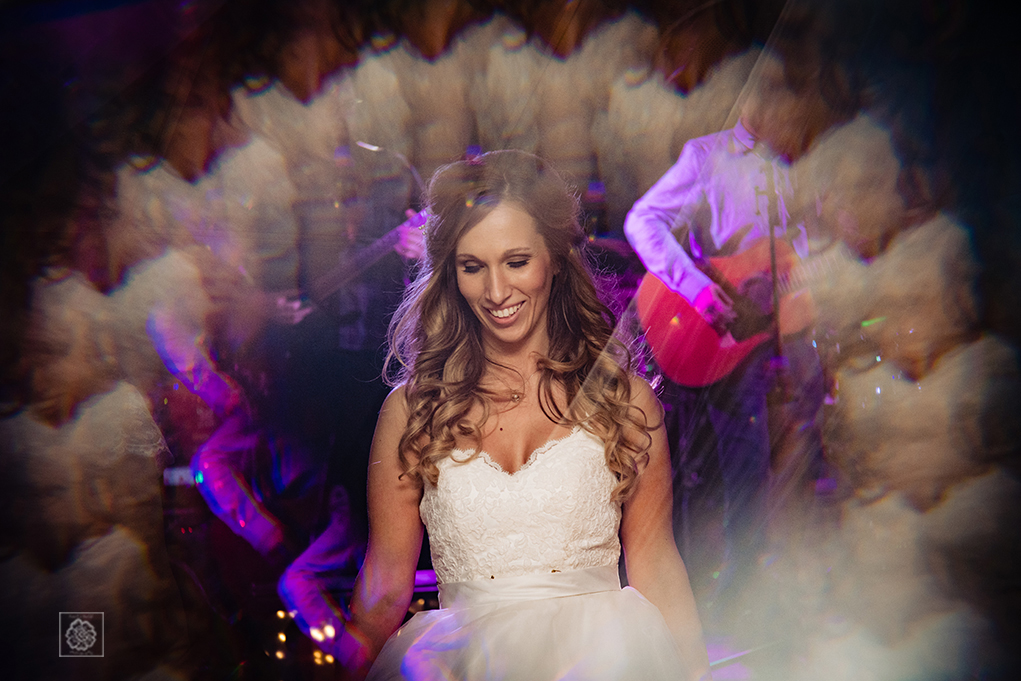 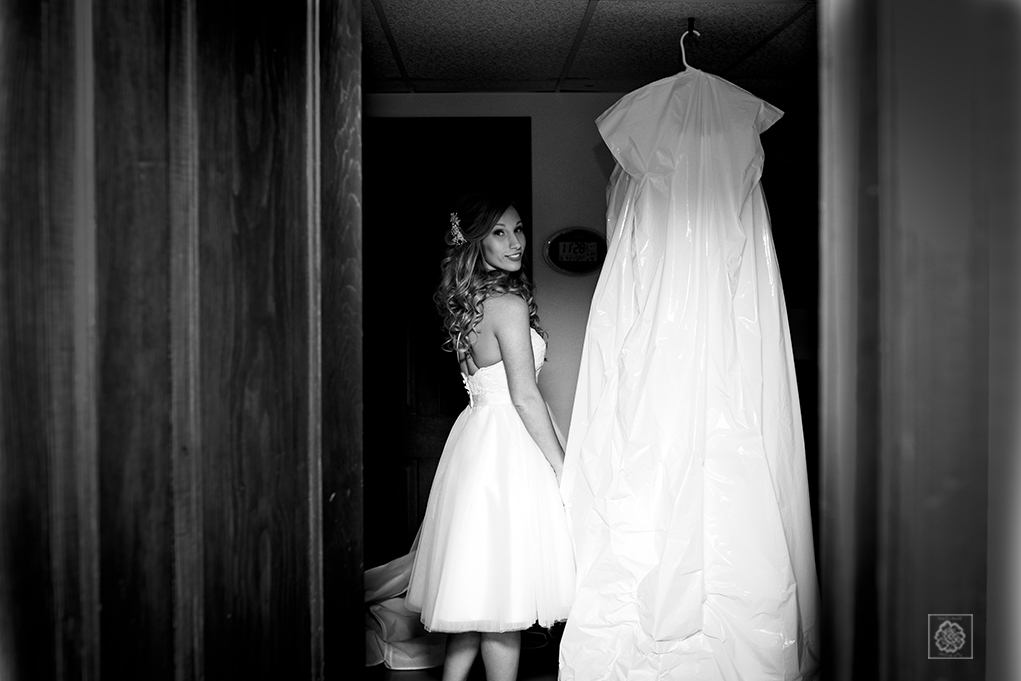 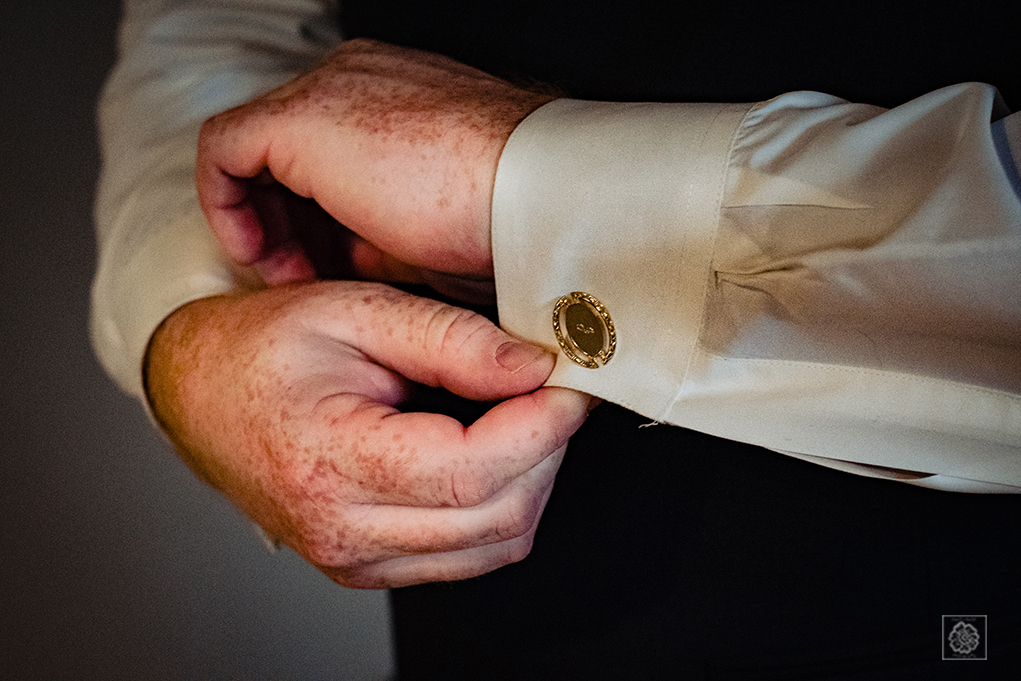 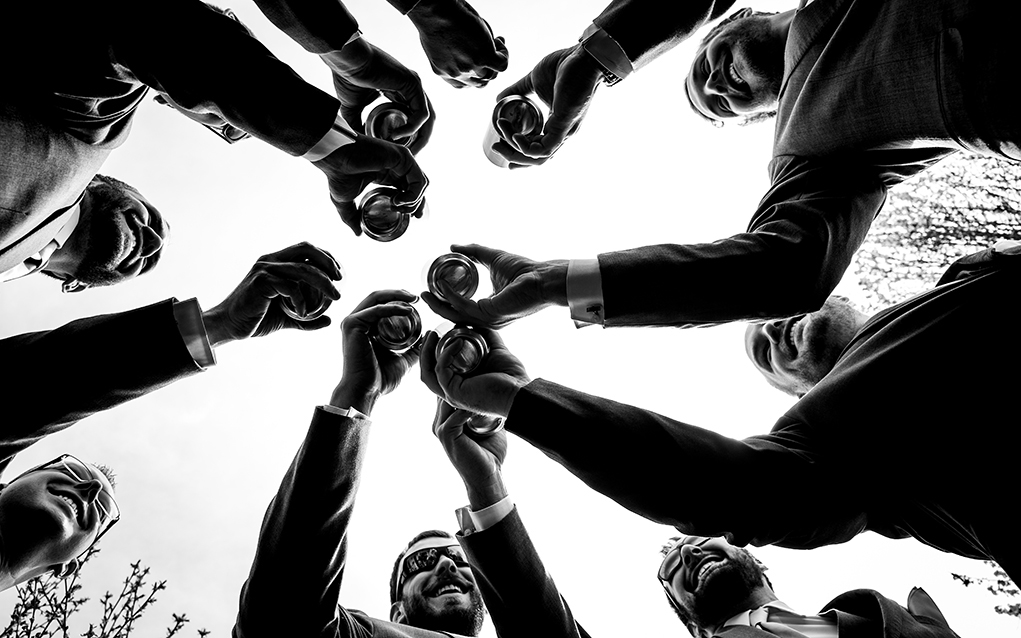 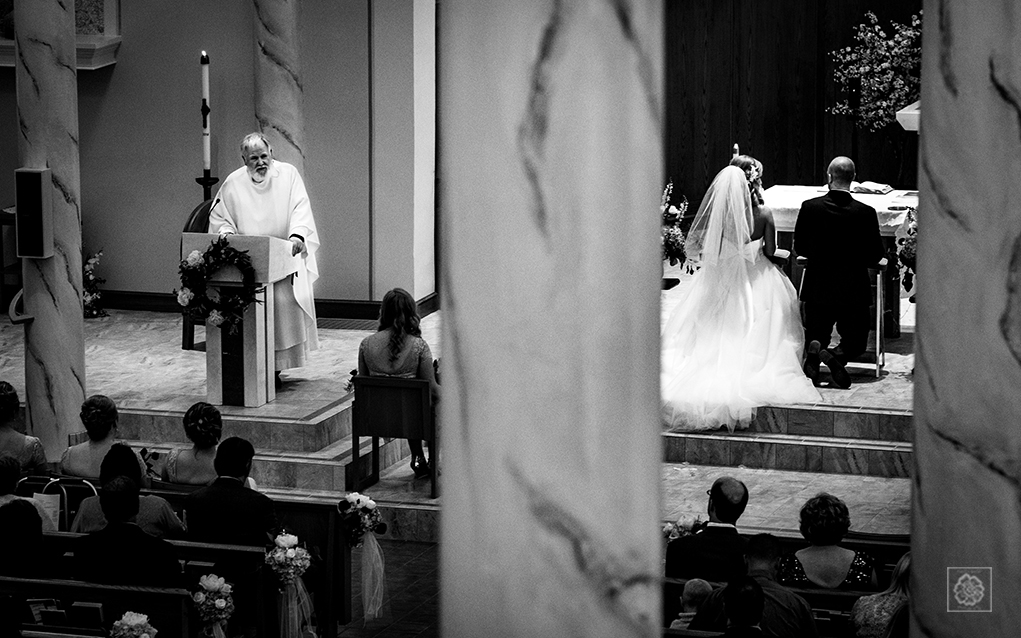 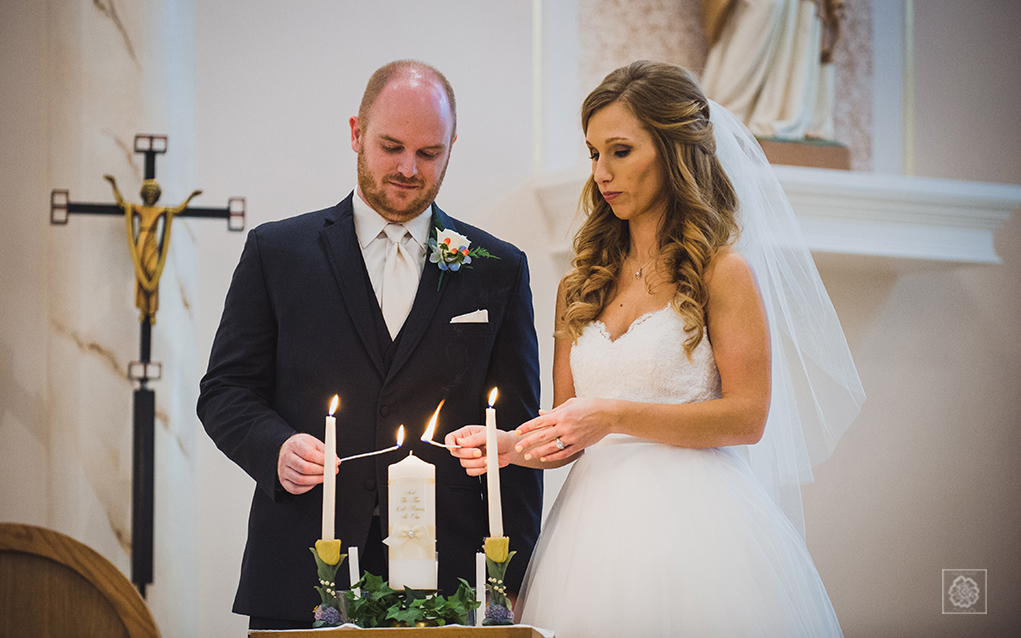 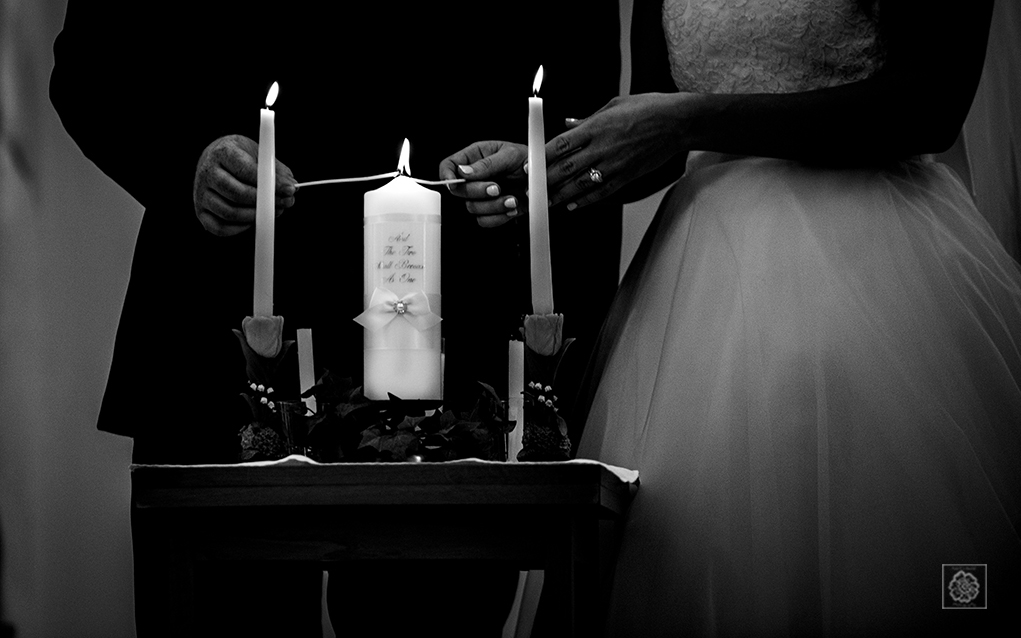 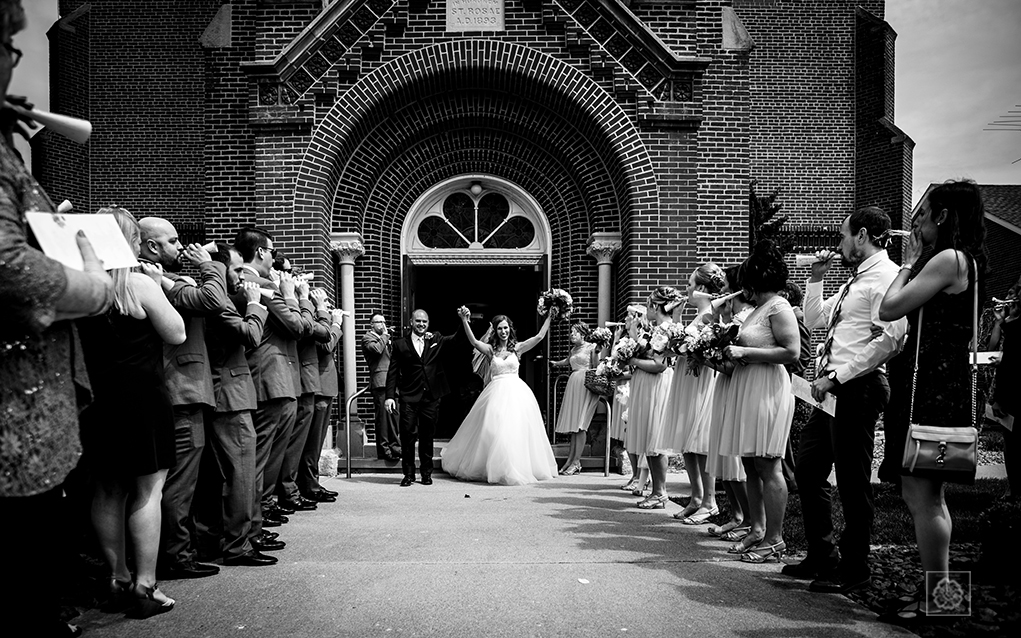 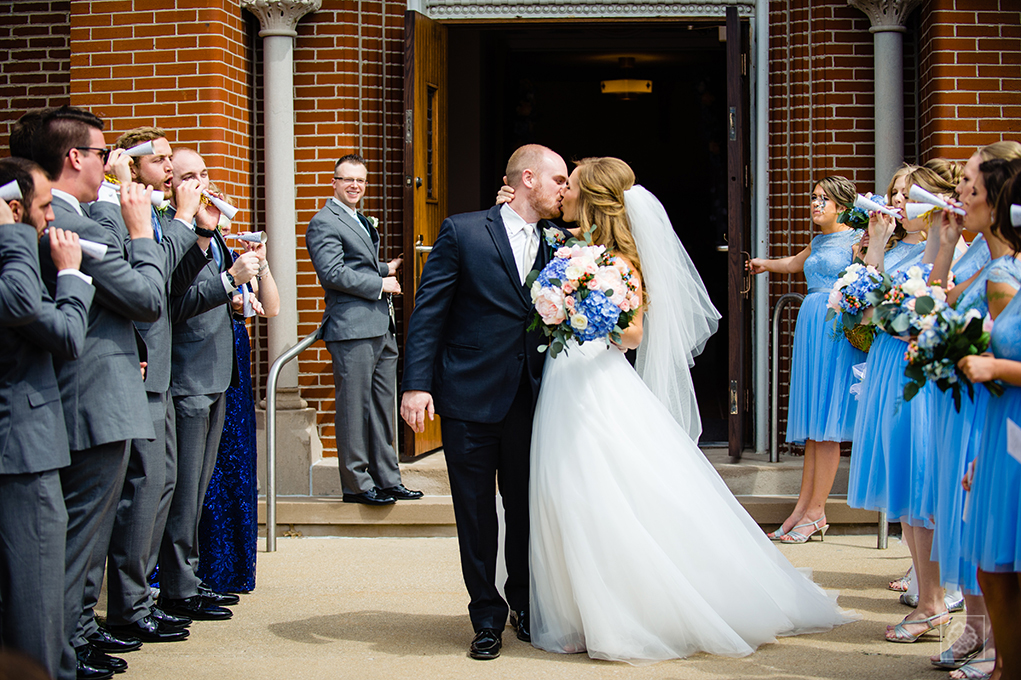 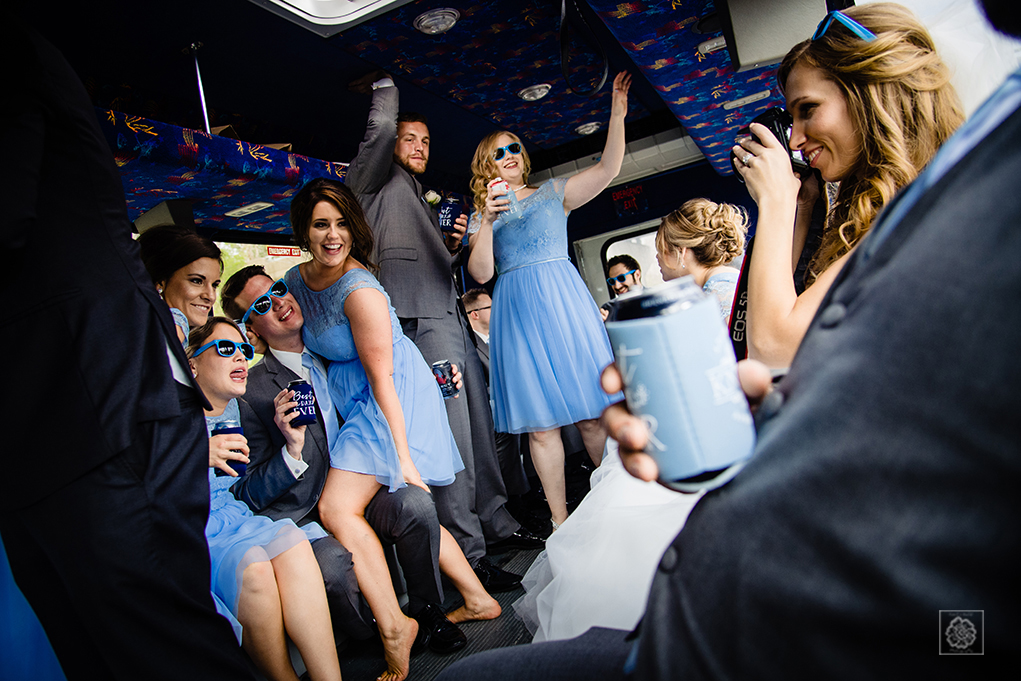 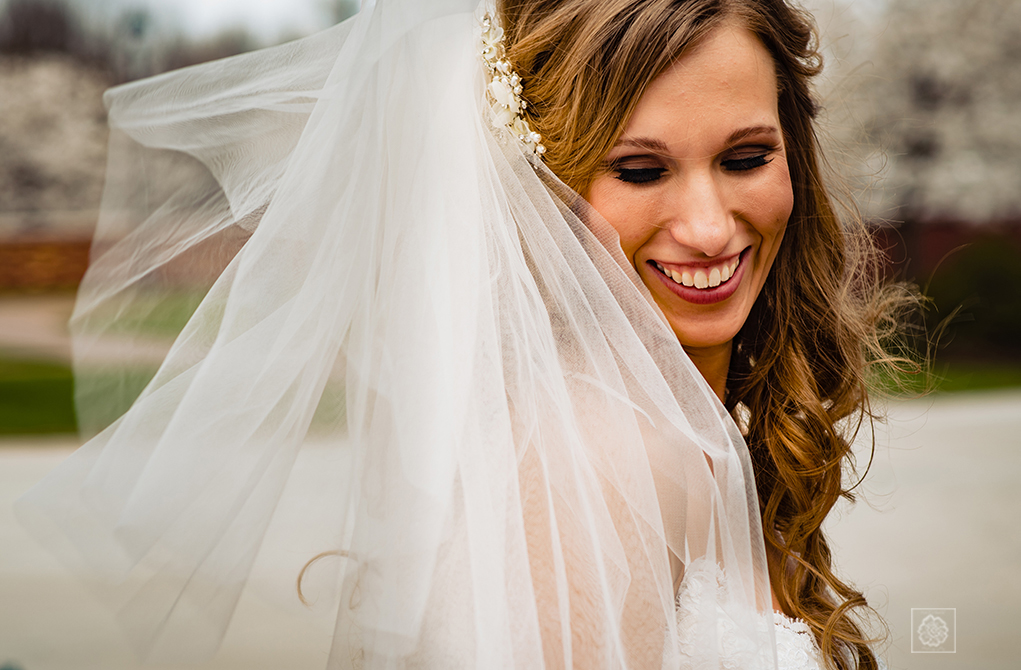 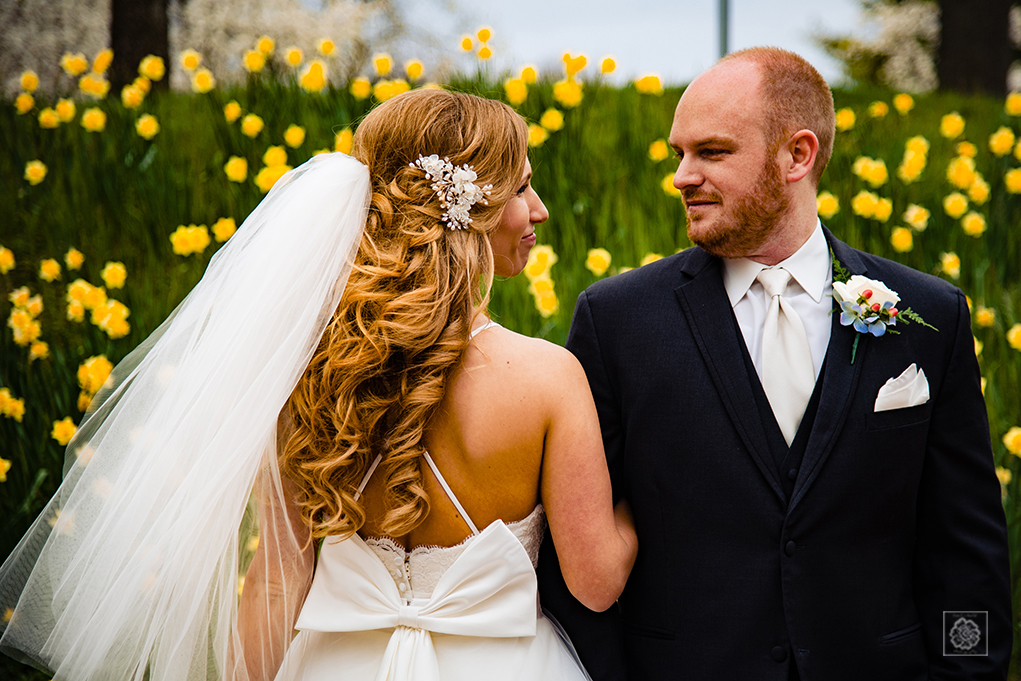 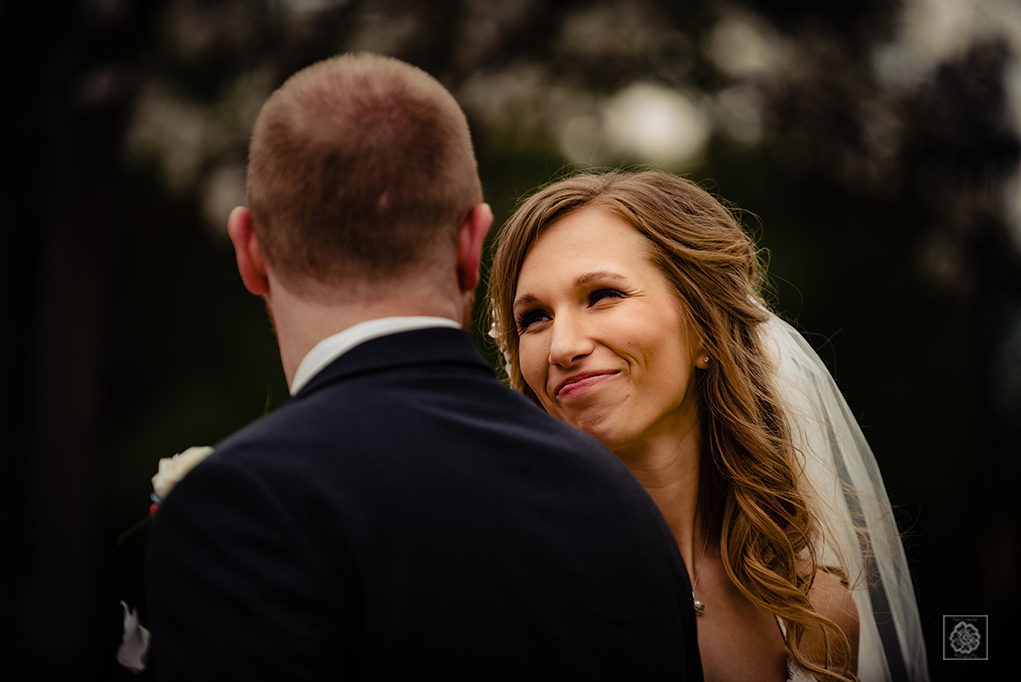 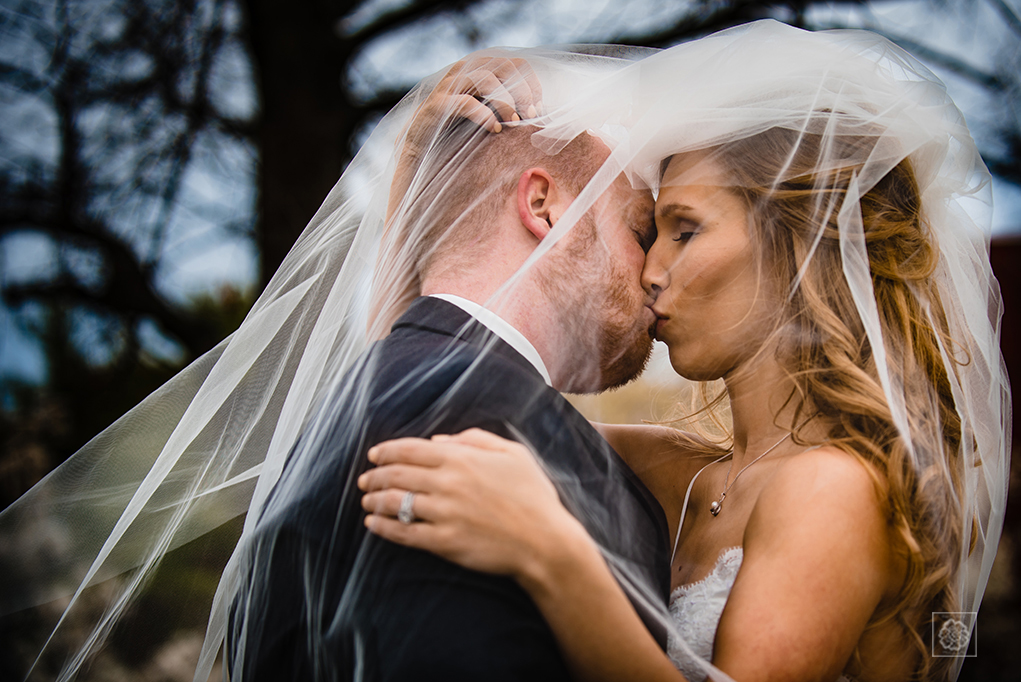 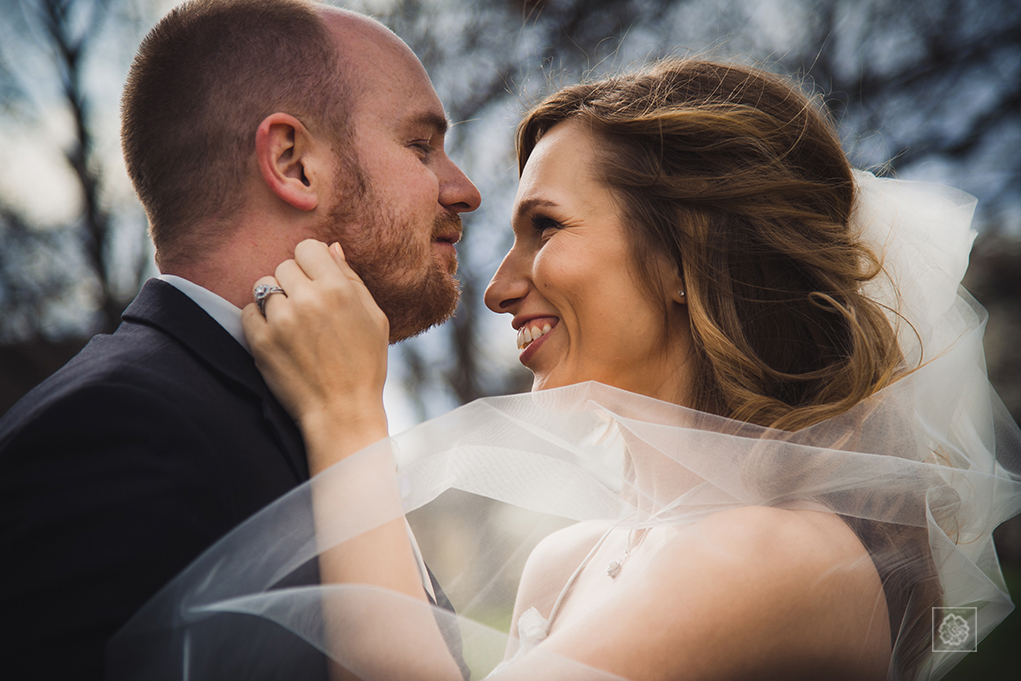 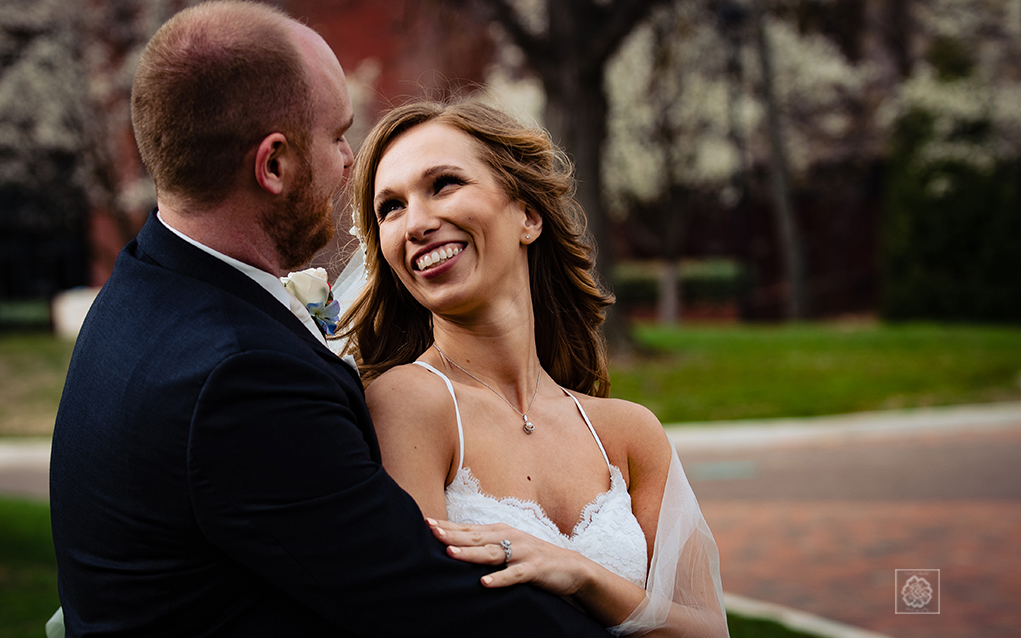 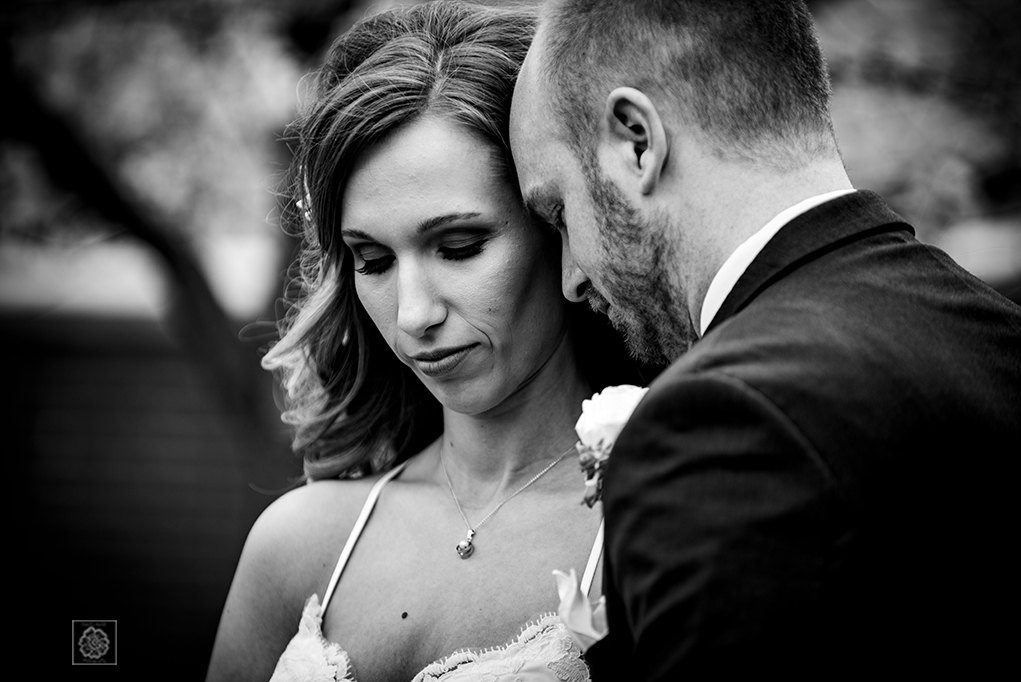 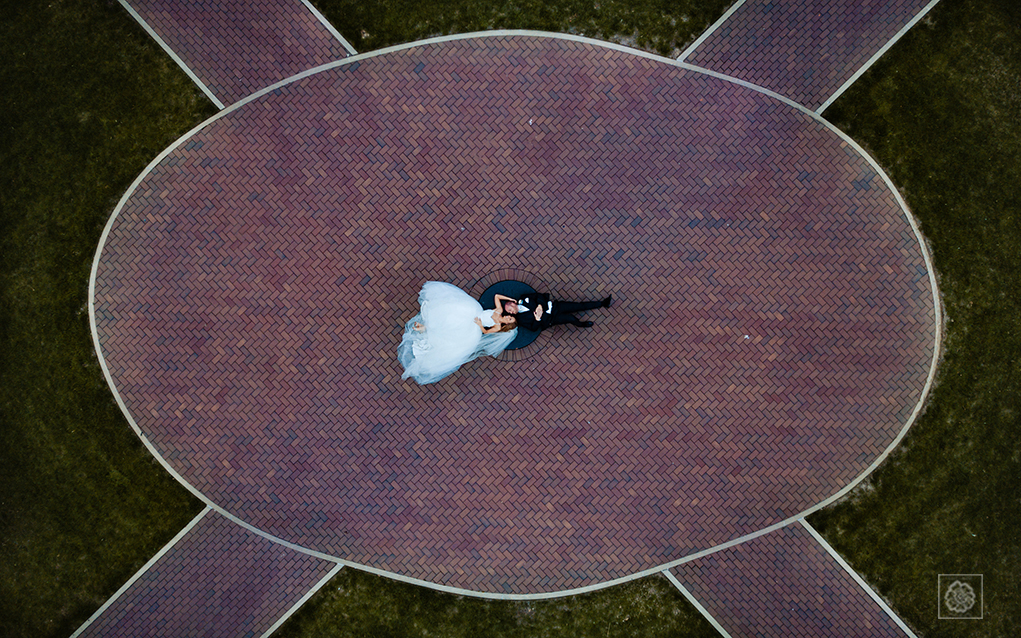 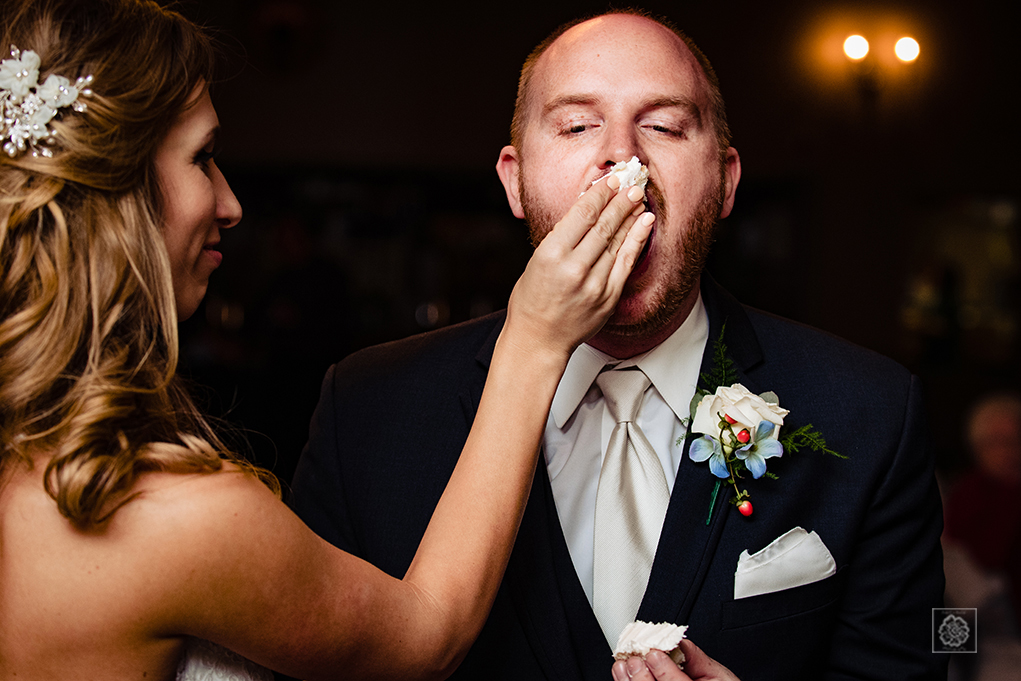 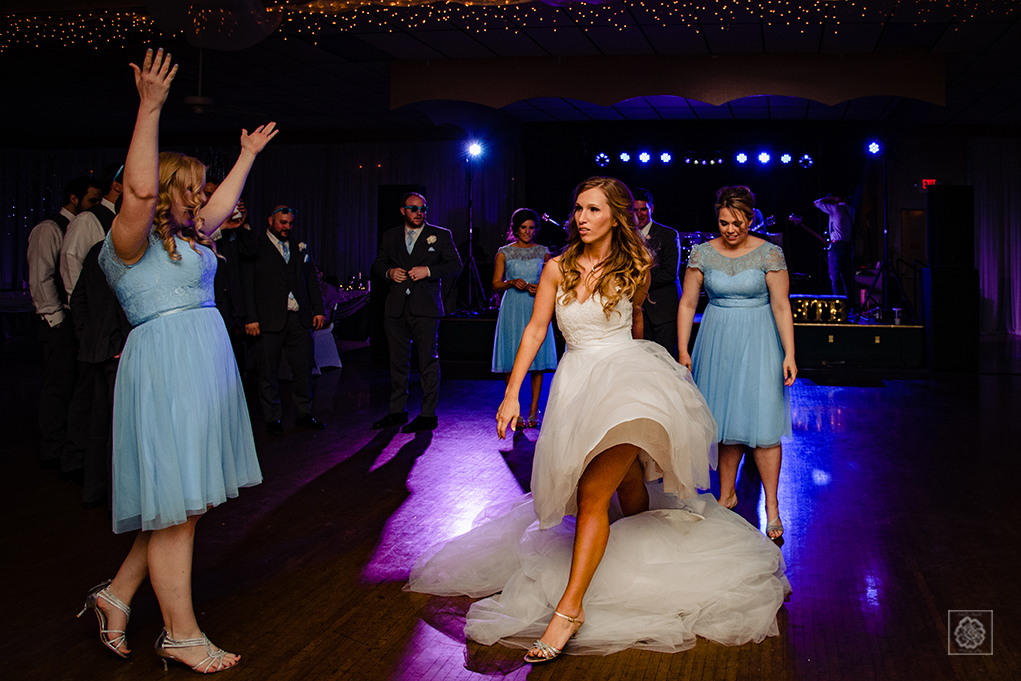