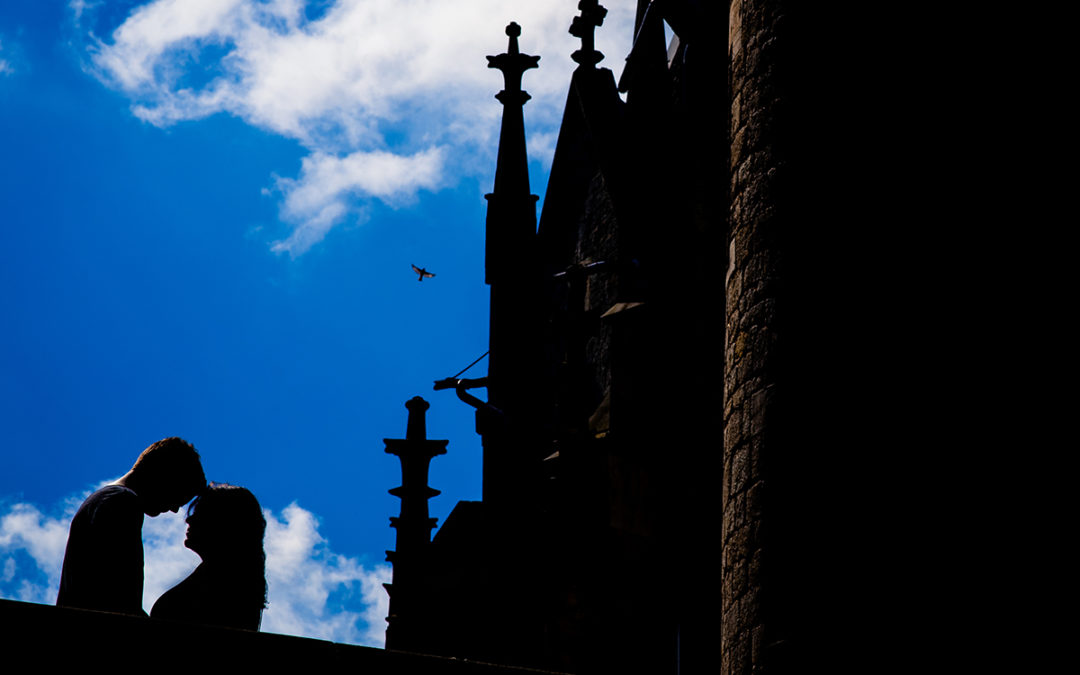 Our goal every time we pick up our cameras is to give our couples photos that are as unique and special as their love story. No two couples take the exact same path to the altar. So no two sets of engagement photos should look the same. Your engagement pictures should be specific to you. That is one reason why we love taking destination engagement photos. It gives us the possibility of giving our couples — particularly those from the United States — something they could never get at home. Like, for example, what we gave these lovely future spouses: engagement photos from Marienburg Castle in rural Germany.

One of the things that struck us when we first started creating destination engagement photos in Germany was the history. More specifically, we marveled at how European history exists on a completely different scale from America’s. (Well, it was something Pete noticed. As a German, Anji was already well aware of it!) On one of our first business trips to the Northern German city of Hannover, we noticed that the town was planning its 775th birthday celebrations. Obviously, no U.S. city comes anywhere close to that age!

Vicky and Christopher, the particular couple featured here, did not actually book us to take destination engagement photos. They are actually from Germany and live in a small town about an hour from Hannover. Because we have been stuck in Europe due to coronavirus, though, we were available for their engagement session. Given that they were the locals, we let them pick the location. Without hesitation, they picked Marienburg Castle, one of the best spots in Northern Germany for stunning castle engagement photos.

Located about 20 miles from Hannover, Marienburg Castle is relatively young by German standards. The last of the Hannover Kings constructed it in the 1850s and 1860s as a birthday present for his wife. For the next few years, it served as a summer residence for the Anglo-German rulers of Northern Germany. After Prussia annexed the region, though, Marienburg Castle sat empty for the subsequent 80 years. As a result, the entire structure remains well preserved inside and out. Which gives the castle engagement photos taken there the perfect feel. The stone walls and towering spires look like something out of a medieval storybook. But they are still in good condition and do not look rundown in the background of destination engagement photos.

We started Vicky and Christopher’s engagement photoshoot on the path leading up to Marienburg Castle. That proved to be an ideal spot for images of them with Schloss Marienburg looming impressively in the background. Then we moved in closer for more intimate engagement photos with only the spires behind them. The next stop was the small bridge connecting the path to the castle’s front gate. First, we captured some gorgeous pictures of them standing on the bridge, silhouetted against the bright blue sky of a German midsummer morning. Afterwards, we brought them down under the bridge for what turned out to be some of our favorite images from the day. Vicky cracked all of us up by doing an impromptu dance while posing. (As an aside, we always love it when couples reveal their inner personalities during engagement sessions. It makes their engagement photos so special and unique to them.)

The session concluded with some of the most awe-inspiring castle engagement photos of the day. Christopher brought us to a spot in a field about a half-mile down the hill from Marienburg Castle. From that vantage point, we used our DJI Mavic Pro drone to capture absolutely jaw-dropping wide-angle shots of him and Vicky with the castle and the gorgeous German landscape behind them. 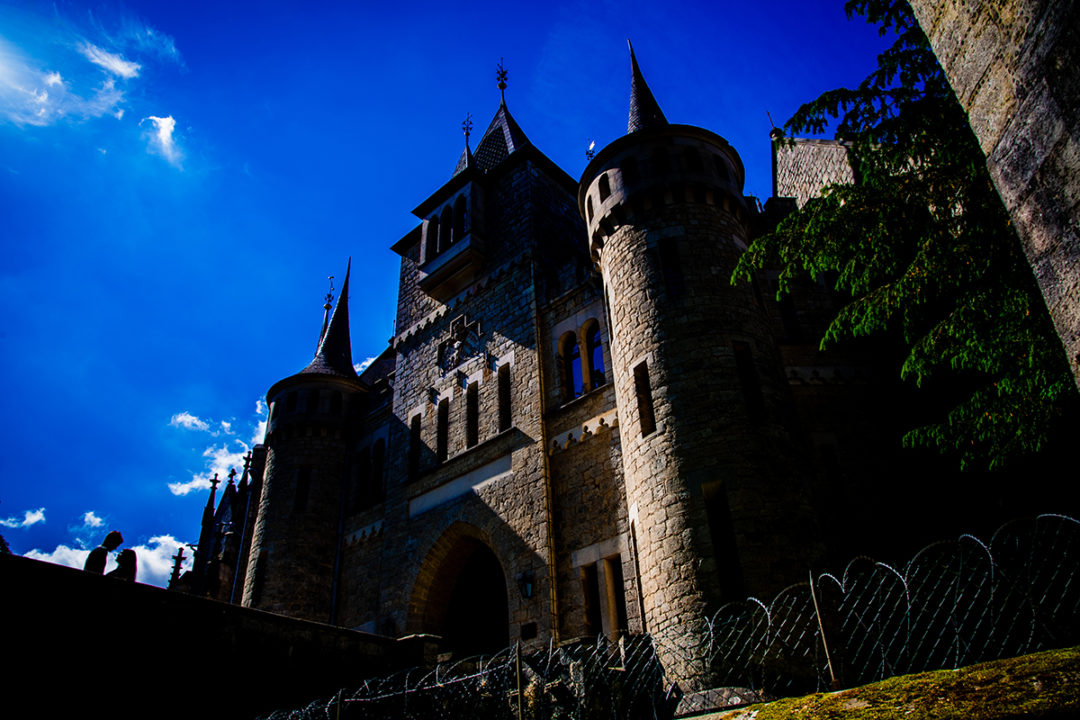 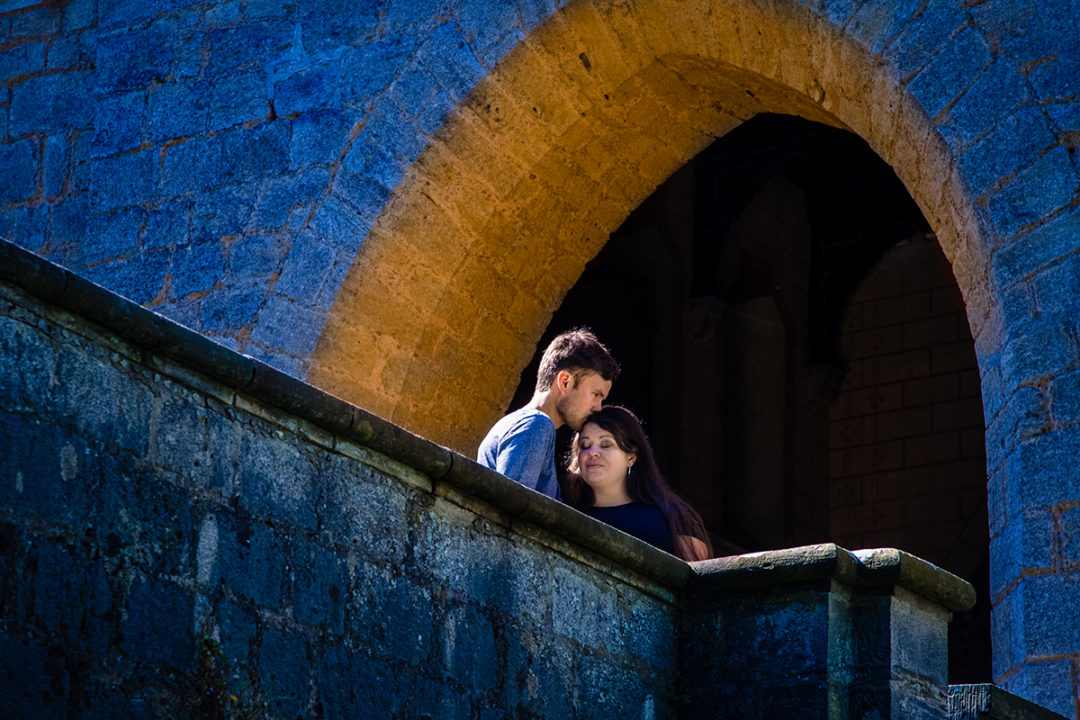 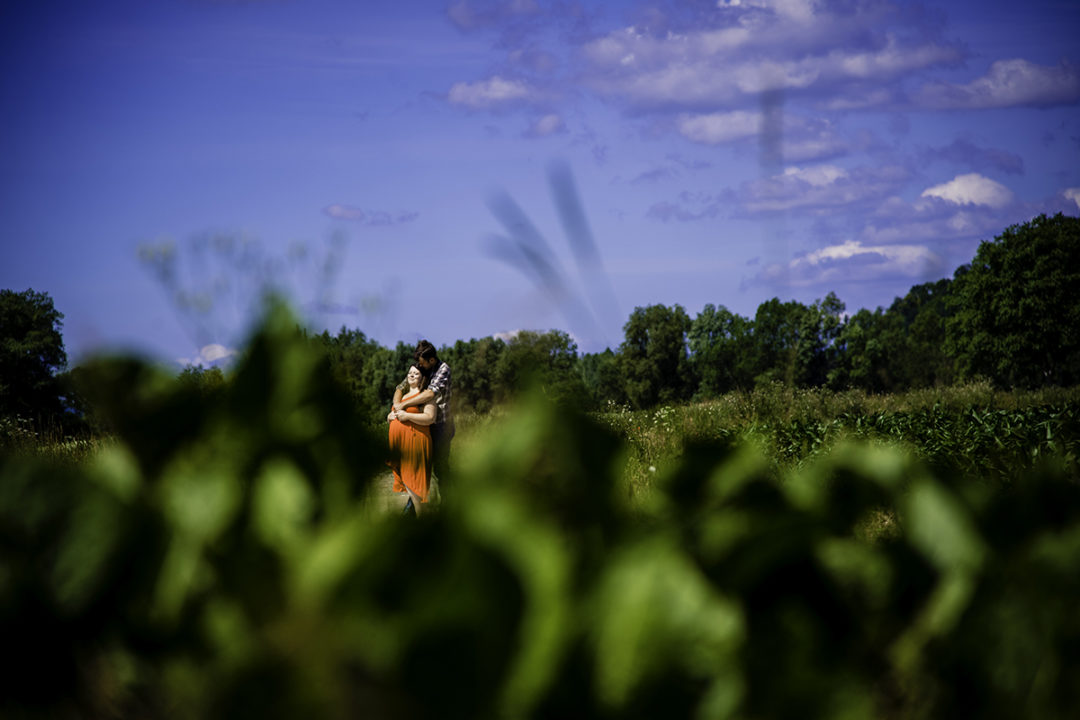 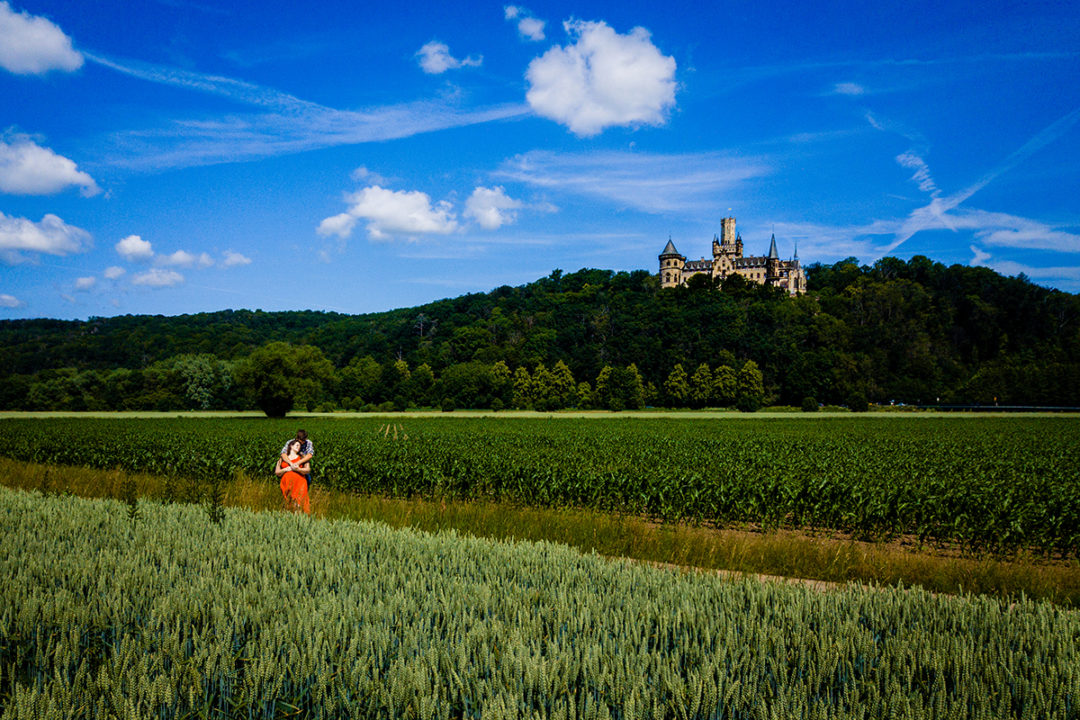