We recently had the pleasure to do a destination engagement photoshoot for Rachel and Erik. Well, sort of a destination engagement session. (We’ll explain why below.) We traveled to Minneapolis to do a true Minnesota winter engagement session in the snow. The location? The Minneapolis Sculpture Garden outside the Walker Art Center – one of the most iconic spots in the Twin Cities. Though the weather was predictably chilly, the couple was so sweet and the location so perfect for creative engagement pictures that none of us even noticed the cold! Their fun-loving and playful personalities shone through in every one of the Minneapolis Sculpture Garden engagement photos we took of them.

We met Rachel and Erik at one of our favorite events of last year – a destination wedding in North Carolina. Rachel was the maid of honor for one of her med school classmates. Almost immediately after we met them, we were struck by the tenderness of their relationship. For example, Erik kept Rachel company while she got her hair and makeup done before the wedding. In all our years as wedding photographers, that was the first time we’ve ever witnessed that! That plus their senses of humor made it plain that they were exactly the kind of couple whose wedding we’d love to document. When we found out that they were from Minneapolis and marrying in the Twin Cities, that just cemented it. We had to photograph their marriage celebrations!

Pete is originally from the Minneapolis-St. Paul metro area, and most of his family still lives there. So though Minnesota is a good distance from our home base in the Nation’s Capital, it is not a completely foreign location either. We get to visit relatives and enjoy a little mini-vacation around any wedding and engagement photography that we do. And that is why we said that Rachel and Erik’s session was a destination engagement photoshoot… sort of!

Before Rachel and Erik even booked our services, we knew where we wanted to do their destination engagement session. The Minneapolis Sculpture Garden at the Walker Art Center is one of the most famous sites in the Twin Cities metro area. Its installations, most notably the Spoonbridge and Cherry fountain, are instantly recognizable parts of the Minneapolis cityscape. So to get portraits with the sense of place that we were looking for, the choice was easy. Fortunately, Rachel and Erik agreed that Minneapolis Sculpture Garden engagement photos were the way to go!

We knew that scheduling Rachel and Erik’s engagement photoshoot in January in Minnesota could pose certain challenges. Let’s say that it’s not the, um, balmiest time of year in that part of the country. Subzero temperatures and blizzards are pretty common occurrences, so the likelihood of an uncomfortable session was high.

Fortunately, though, braving the elements is an integral part of Minnesotan culture. Even when the temperatures dip well below freezing, you’ll find Minnesotans out and about. They ski and sled and snowshoe and skate. Resistance to the cold is almost a point of pride in the state. After all, what choice do you have but to embrace it when this is the reality year after year?

That is exactly the approach that Rachel and Erik took toward their Minnesota winter engagement session. Because they needed the pictures for their save-the-date cards, they couldn’t wait until the spring for the photoshoot. So they did what all Minnesotans do. They dressed warmly and decided to make the best of it!

The good news for them was that the conditions were as perfect as anyone could have hoped for. There was snow on the ground, which is one of the best things about a winter engagement photoshoot in the first place. But the sun was out and the temperatures were relatively mild. So they felt pretty relaxed and comfortable throughout.

Our initial plan was to start Rachel and Erik’s session at the aforementioned iconic spoon-and-cherry fountain in the center of the park. No installation is as synonymous with the Minneapolis Sculpture Garden and the city of Minneapolis as that one. Unfortunately, though, the water was not running and the pool surrounding the sculpture had frozen over. No big surprise there! What was an unfortunate surprise, though, was that the distinctive cherry at the tip of the spoon was missing. Apparently, it was out for repairs before the much busier summer season. In the end, that wasn’t a problem at all. We still got plenty of great and iconic engagement portraits at the Walker Art Center Sculpture Garden!

We started the session at LOVE, a world-famous pop art installation by Robert Indiana. Versions of this sculpture exist on nearly every continent and in multiple different languages. (Interestingly, the one at the National Sculpture Garden in Washington, DC, says “AMOR.”) As a location for engagement portraits, it is a little bit cheesy. But it’s also sweet and fun. And that’s why we thought it would be a good place to start the session. Someplace that would help the couple relax and get into the flow.

After playing with a few different poses near the LOVE sculpture, we moved on to another of the sculpture garden’s iconic installations. Hahn/Cock, a piece by German artist Katarina Fritsch, is a huge, bright blue rooster statue looming over the rest of the park. The version in the Minneapolis Sculpture Garden is actually the second that the artist produced. The original has sat in London’s Trafalgar Square since 2013. Its irreverent presence there has brightened many a Londoner’s day and sparked many, MANY puns and double entendres. (If you have a juvenile sense of humor like we do, then the sculpture’s Wikipedia page is worth a read.)

After taking some standard portraits of Rachel and Erik posing at the foot of the statue, we decided to mix things up a little bit. To get some more creative sculpture engagement photos, we had the couple do a little dancing. The spins and twirls added a bit of dynamism to the shots and really got Rachel and Erik loosened up. Of course, the giant blue chicken towering above them also catches the eye!

Engagement Photos in the Snow

From there, we brought the couple to the far end of the Minneapolis Sculpture Garden. Along that edge of the property is a long pathway running under an arched trellis. In the summer, gorgeous flowers hang from the bars and offer a bit of shade for visitors. Obviously, everything looks a little different in the winter. But the seemingly infinite curves trailing off into the distance still make a very visually interesting background for portraits! In this particular case, we decided to go for a more standard look. We focused on “shots for grandma’s mantel,” in which the couple looked at the camera and some that highlighted Rachel’s engagement ring.

Around the corner from that walkway is another path that runs the length of the sculpture garden. It passes between a line of evergreens and an open lawn with shrubs. Though it is green in the summer, the latter space fills up with snow in the winter. And of course, engagement photos in the snow are one of the best reasons to have an engagement session in the winter.

So with that in mind, we had Rachel and Erik wander into a space between the shrubs. Then we got some fun shots of them tossing handfuls of snow in the air. In addition to adding a bit of movement to the images, that also highlighted the playfulness that was at the heart of this couple’s relationship.

The next stop was an installation that was somehow conventional and offbeat at the same time. X with Columns by Sol LeWitt is exactly what it sounds like. It is a series of tall columns that, when viewed from above, form a cross with arms of equal lengths. Because it comprises cinder blocks, it looks like a partially constructed house. Though it might seem like a boring spot for engagement photos, the simplicity of its layout is actually a huge asset. For example, the “windows” are perfect for framing couples and drawing the eye to them.

We played around with a few different compositions. In a few, we had Rachel and Erik embracing in one window and the distinctive dome of the nearby Basilica of St. Mary in another. Then we brought them to the other side of the installation. We had Erik stand in one of the three windows and Rachel in the second. In the third was the blue chicken statue. (We have to admit that we fell in love with that sculpture and kept looking for excuses to include it in the portraits!)

From there, we took them to the footbridge that connects the Minneapolis Sculpture Garden with Loring Park. With its bright yellow and green support beams, the Irene Hixon Whitney Bridge is another distinctive part of the cityscape. We had Rachel and Erik climb up to the top of the structure and pose there. Because the sky was clear that day, we wanted the great expanse of deep blue as a backdrop. So we stayed down on the ground and took Irene Hixon Whitney Bridge engagement portraits from there.

Next Up: Rachel and Erik’s Nicollet Pavilion Wedding

At this point, the wind started whipping up and the temperatures dropped quickly. So we brought the couple back down and had them do one last set of photos. We asked them to cross the open space that runs under Empire, a spindly, spider-like installation near the entrance to the Walker Art Center. To make things a little more interesting, we asked them to “drunk walk” towards us. This never fails to make walking portraits more fun. And believe it or not, it actually looks really good on film! As we knew this fun-loving couple would, Rachel and Erik really leaned into this. They even went as far as to try to push each other down in the snow!

We had such a great time taking your engagement photos, Rachel and Erik! Thank you for giving us the opportunity to tell this part of your love story! And we’ll see you again in August for your Nicollet Pavilion wedding! 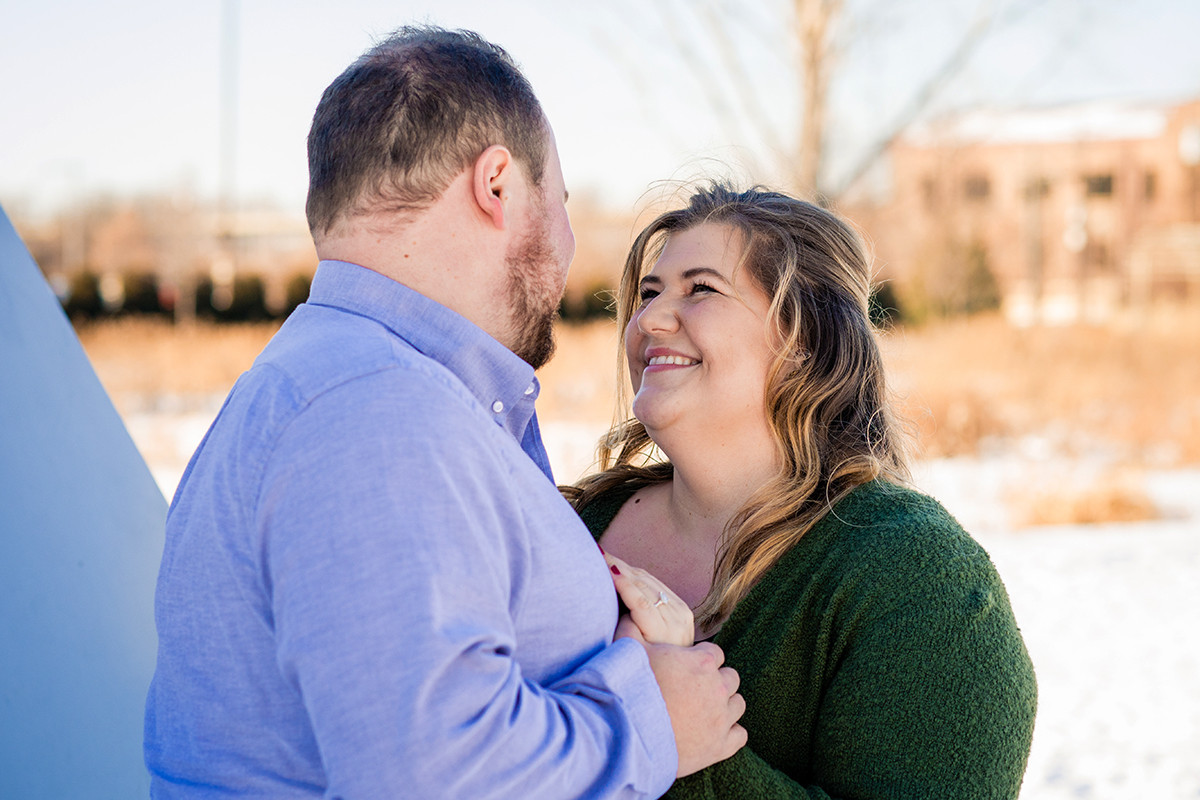 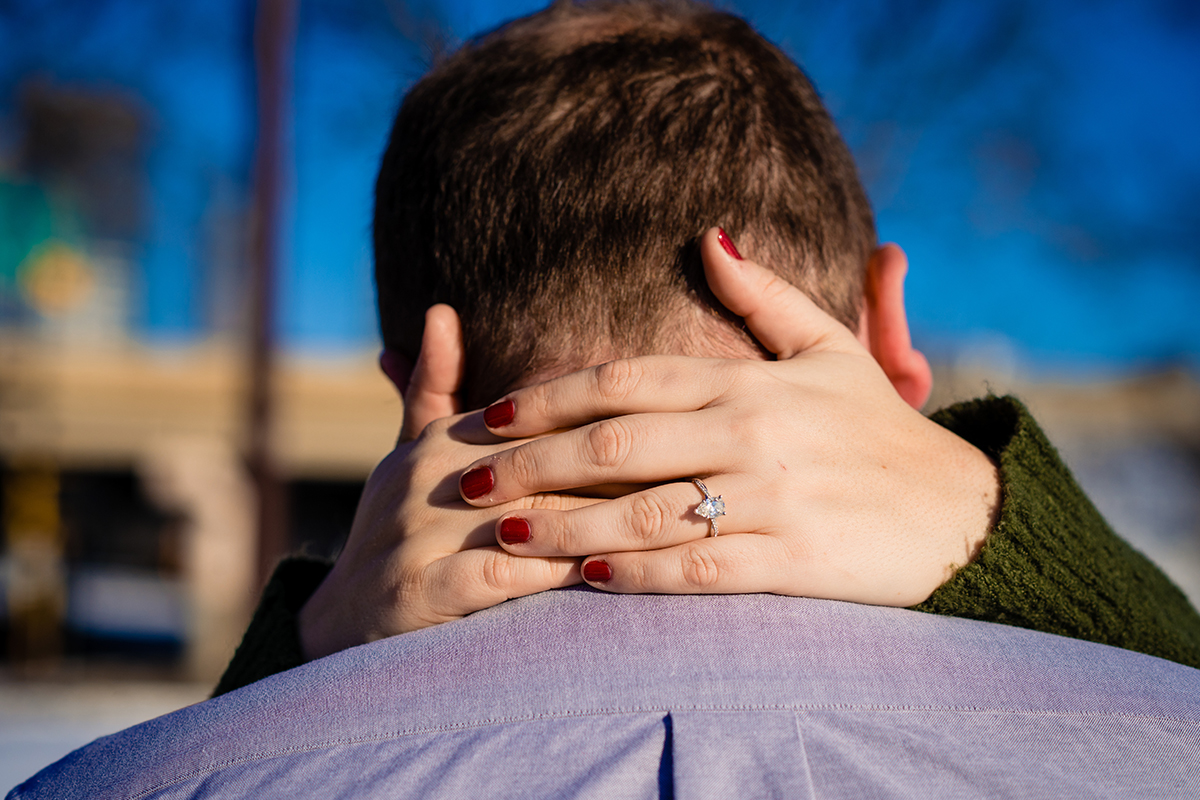 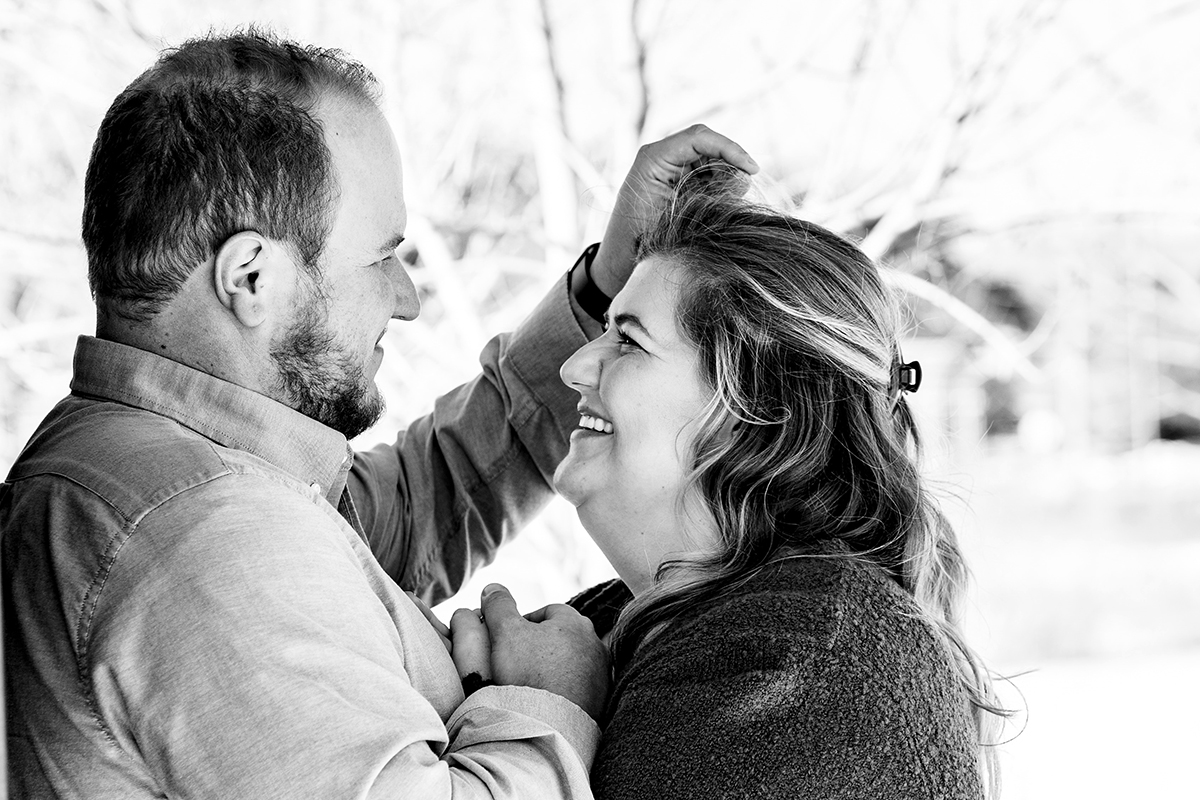 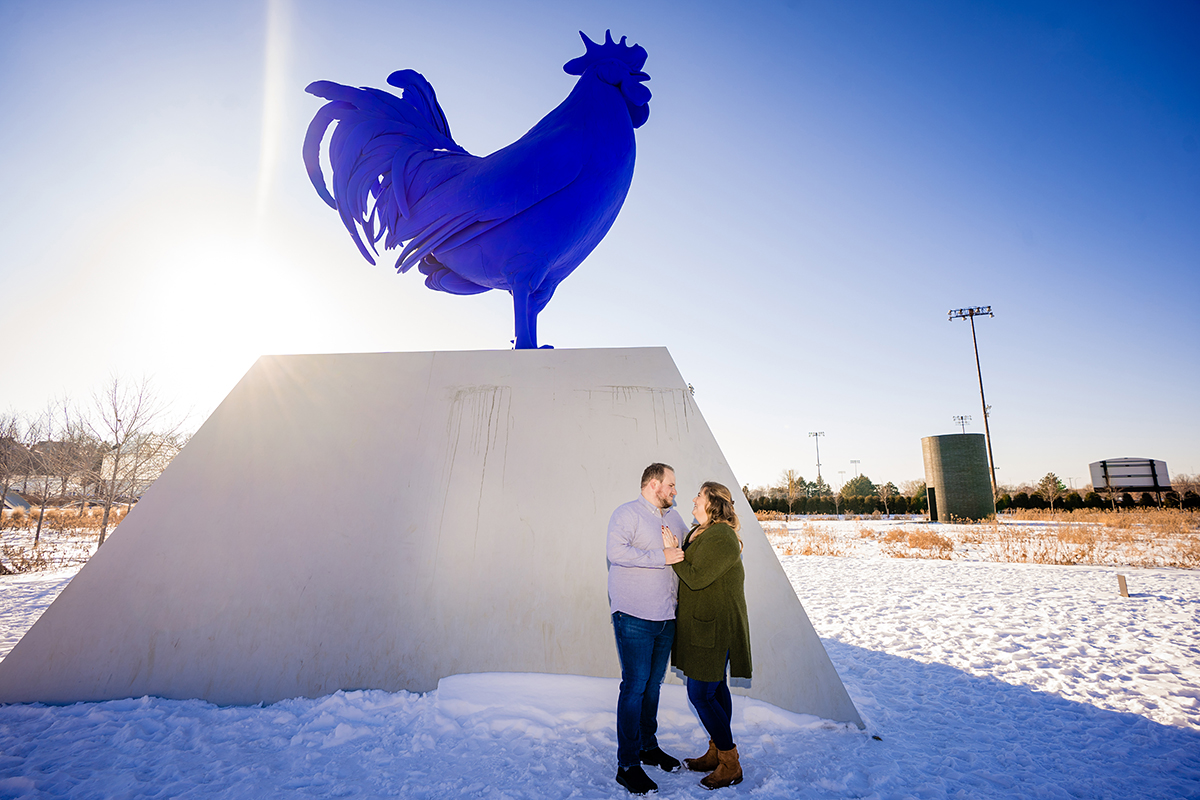 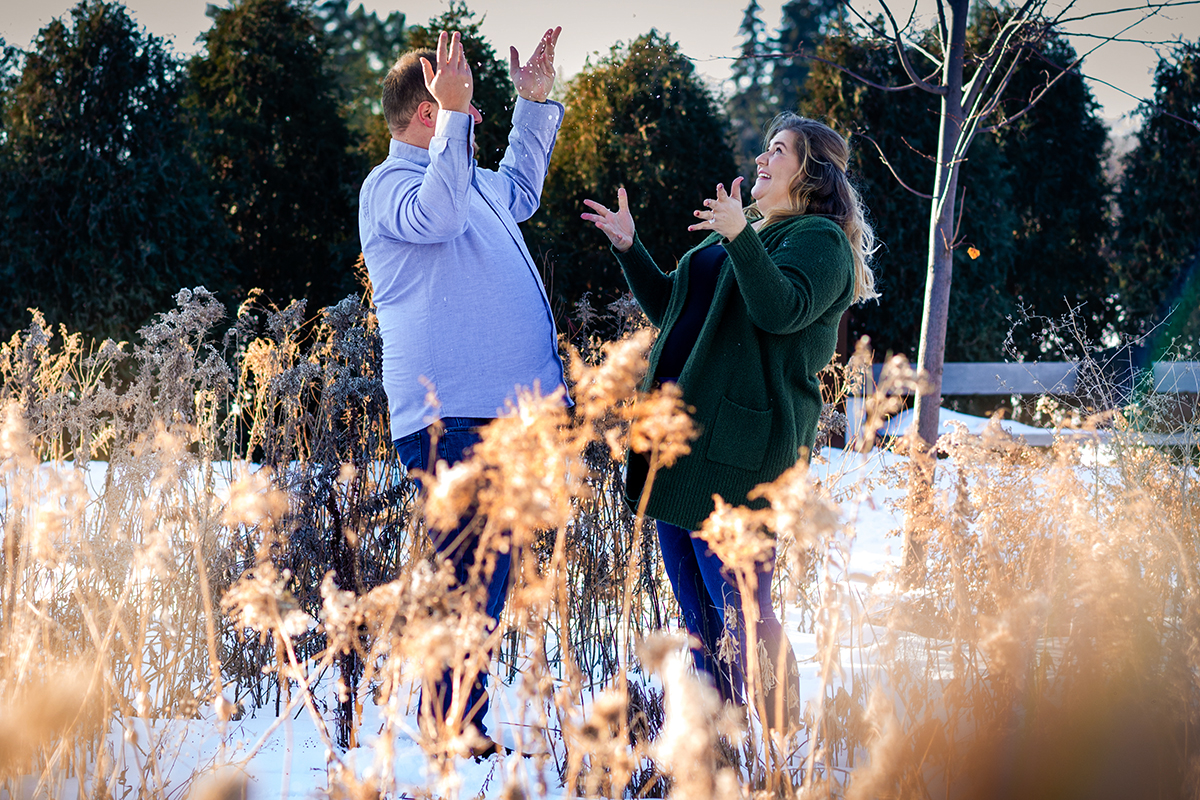 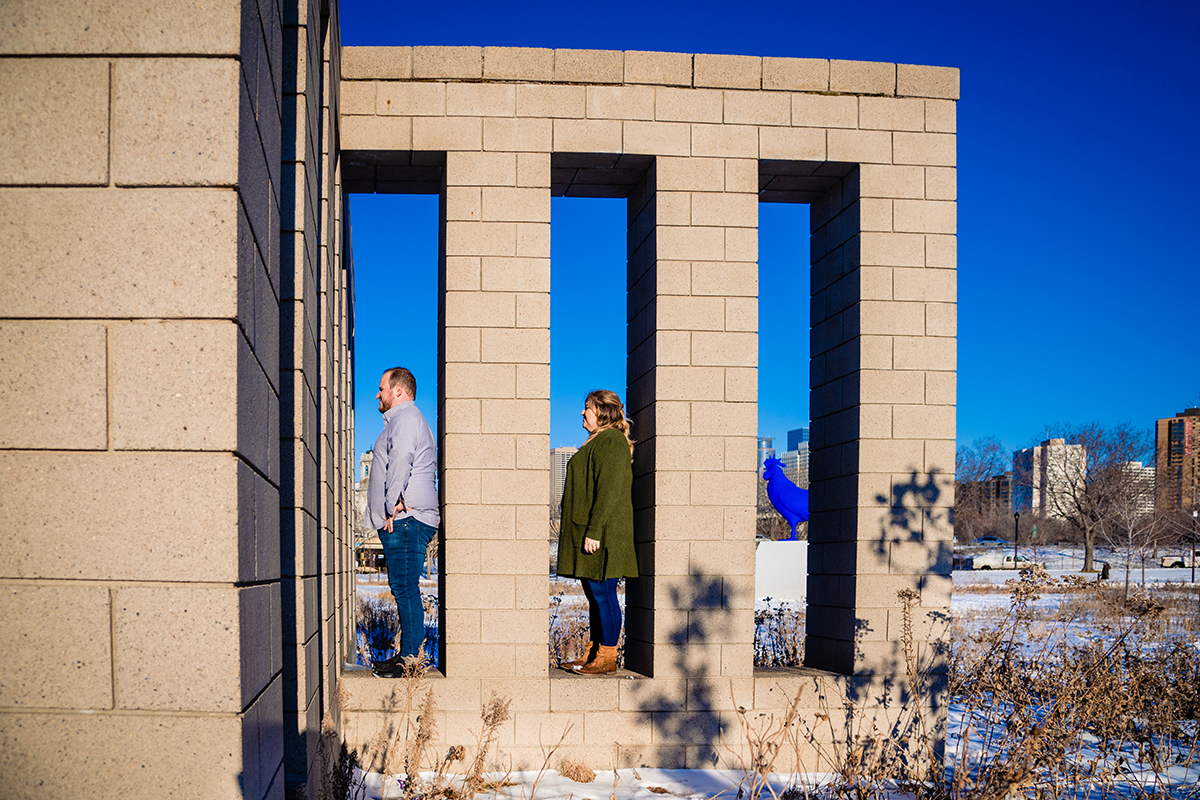 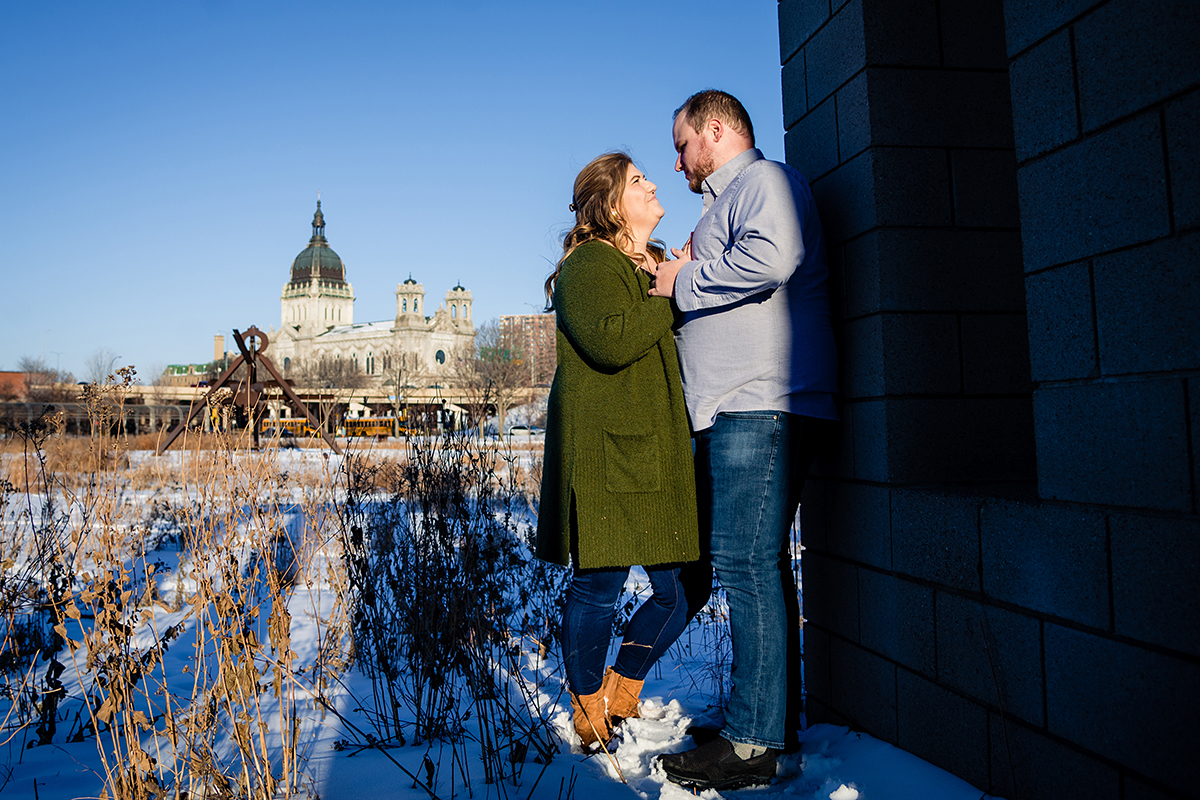 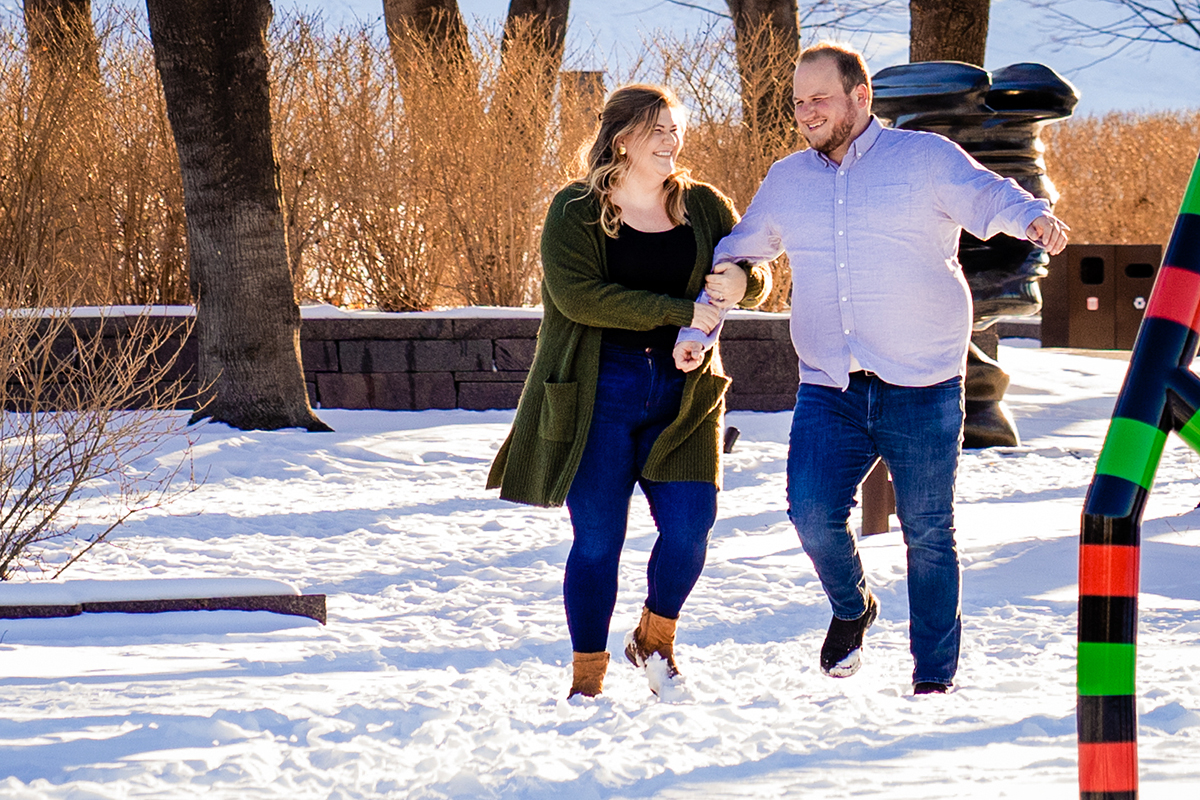