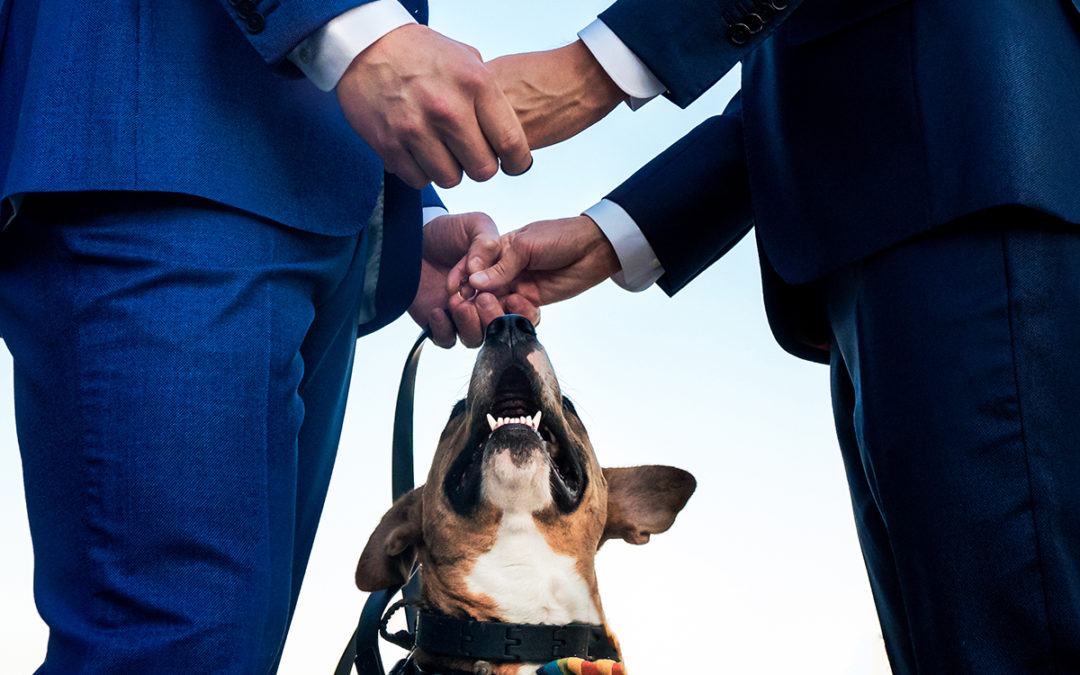 If you’re looking for a luxury hotel to host your wedding, Washington DC obviously offers you a wealth of choices. One that might not be on your radar, though, is the Conrad Washington, DC. If it isn’t, though, it really ought to be! A part of the Hilton family of hotels, this establishment in downtown DC offers you everything you could want in a wedding venue. For starters, a Conrad Hotel DC wedding gives you lots of spots for really creative and cool wedding portraits. It also (unsurprisingly) gives you and your guests the most luxurious of accommodations. And finally, it gives you and your future spouse a rooftop ceremony/reception space with unparalleled views of the US Capitol and Washington Monument. Samuel and Michael got all this and more during their same-sex wedding. And so will you if pick the Conrad Washington, DC for your nuptials!

Samuel and Michael’s marriage celebrations did not exactly follow a standard format. For starters, their Conrad DC wedding came together at the last minute. And we mean that quite literally! Using the pretense that they were participating in a styled shoot for us and the hotel, Michael had arranged a surprise wedding ceremony for his husband-to-be. It wasn’t until the car ride to the hotel that he let Samuel in on the plan.

Needless to say, the ruse created one surprise after another for Samuel. And those moments made for some great photos! Unfortunately, Michael revealed the secret when no photographers were present. But Samuel’s delighted reactions to what his fiancé had planned marked just about every other part of the day. The best one probably occurred when the couple stepped out onto the Conrad’s rooftop for their ceremony. Not because of the breathtaking view of the DC skyline. Instead, it was seeing all of their family and friends waiting to celebrate their love that really brought tears of joy to Samuel’s eyes.

Before that lovely moment, however, Samuel and Michael spent a couple of hours posing for couples portraits. Fortunately, getting gorgeous formal pictures is one of the best things about having a wedding at the Conrad Washington, DC! The hotel is a short walk from many of the most iconic places in the Nation’s Capital. It shares DC’s historic Chinatown neighborhood with the National Portrait Gallery, American Art Museum and Ford’s Theatre. The first two offer you a lovely combination of traditional and offbeat backdrops for your portraiture. The last has played an important (though infamous) role in our country’s history. Just a little farther away are the White House and National Mall. The allure of those two sites is pretty obvious, of course!

If you want something closer to the Conrad Washington, DC, though, give some thought to CityCenterDC. That upscale urban shopping district is where Sebastian and Michael’s portrait session started. And as you can see, it is a great place for cool and creative couples portraits! Our favorite parts of the complex are the promenades that run between the stores. Those lanes have pink, red and white spheres hanging from lines above. Those make wide-angle shots of you and your future spouse strolling under them are absolutely breathtaking! CityCenterDC also has lovely little nooks that are perfect for more intimate shots.

Wedding timelines don’t often leave a lot of time for walking around, of course. If that’s the case for you, though, don’t worry! You don’t even need to leave the Conrad Washington, DC to get beautiful couples portraits. The hotel’s ultra-modern interior decor gives pictures there a funky feel that truly makes them stand out. Even the Conrad’s rooms make great spots for portraits if you’re really pressed for time on your wedding day!

Of course, the best part of the rooms at the Conrad Washington, DC isn’t the potential for stunning portraiture. It’s the comfort and luxury you get if you stay in them before or after your Conrad Washington DC wedding celebrations! Though their design follows the same European-inspired modern and minimalist style as the rest of the hotel’s interior, the accommodations offer a very relaxing experience with every possible amenity available to you.

Want a Gorgeous View of DC? A Conrad Hotel Wedding Ceremony Gives You One!

As great as the portrait locations and rooms are, though, the Conrad’s real crown jewel is that aforementioned rooftop view. As soon as you step off the elevator and out into the open air, you’ll stop and stare in awe at the DC skyline. The leading lines of the roof’s narrow layout draw your eyes directly to the US Capitol’s distinctive dome. That iconic structure is particularly lovely in the late afternoon, when the softer sunlight gives it a slightly orange glow.

That time of day was when Samuel and Michael exchanged their wedding vows. Which meant that we got lots of gorgeous photos of them tying the knot with the city behind and below them. As is almost always the case, though, what made their ceremony beautiful. Instead, it was the love they had for one another and that their guests had for them. No backdrop could ever compare to the touching way that Samuel and Michael’s family and friends cheered when the couple stepped out onto the rooftop. Nor could it match the loveliness of the tears they shed during the ceremony. Nor could it take their attention away from Samuel and Michael’s adorable pet dog, who accompanied them down the aisle and kept stealing the show during the proceedings.

Thank you again, Samuel and Michael, for allowing us to document your Conrad hotel wedding! We value the trust you placed in us and hope that the pictures we took do justice to the beauty of your marriage celebrations! 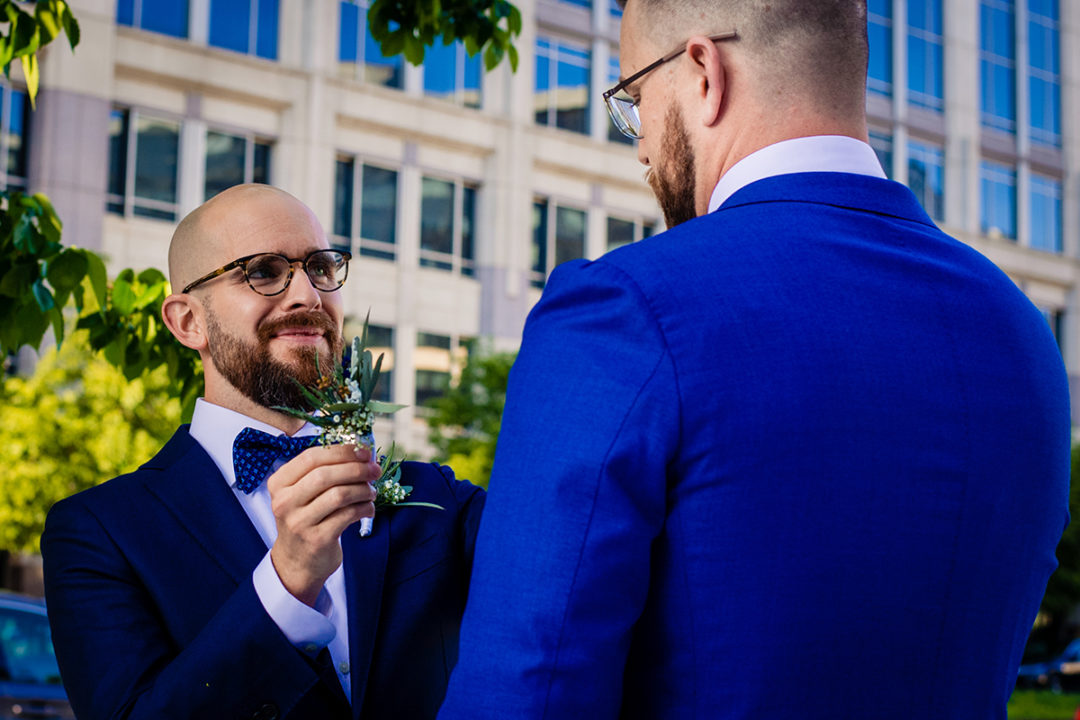 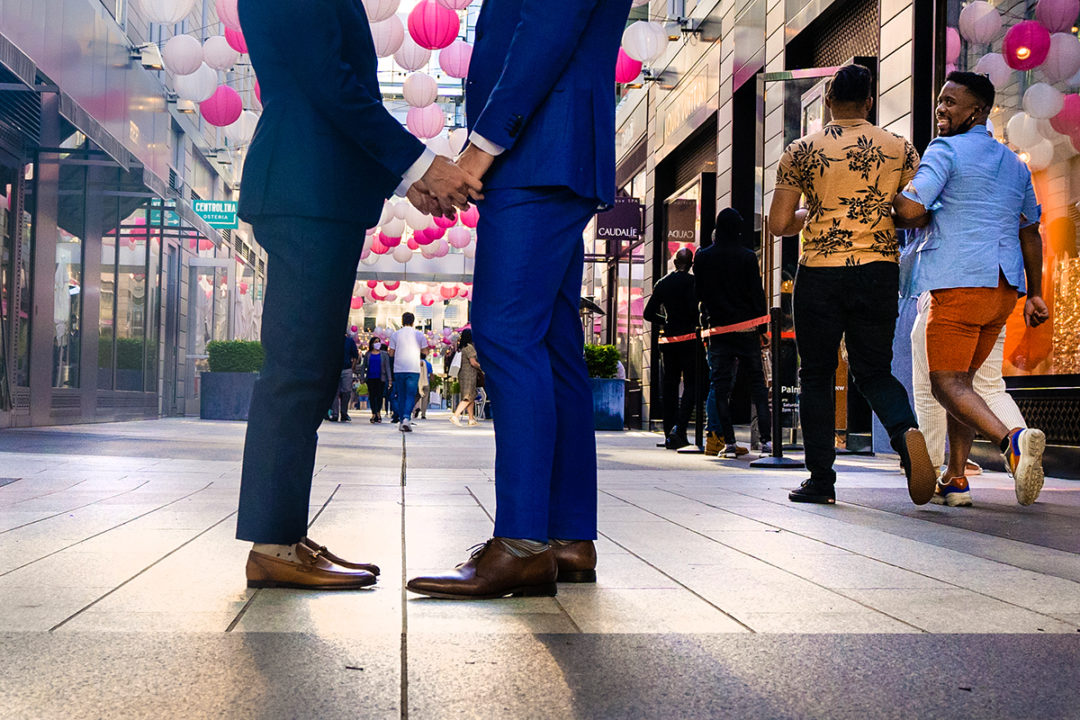 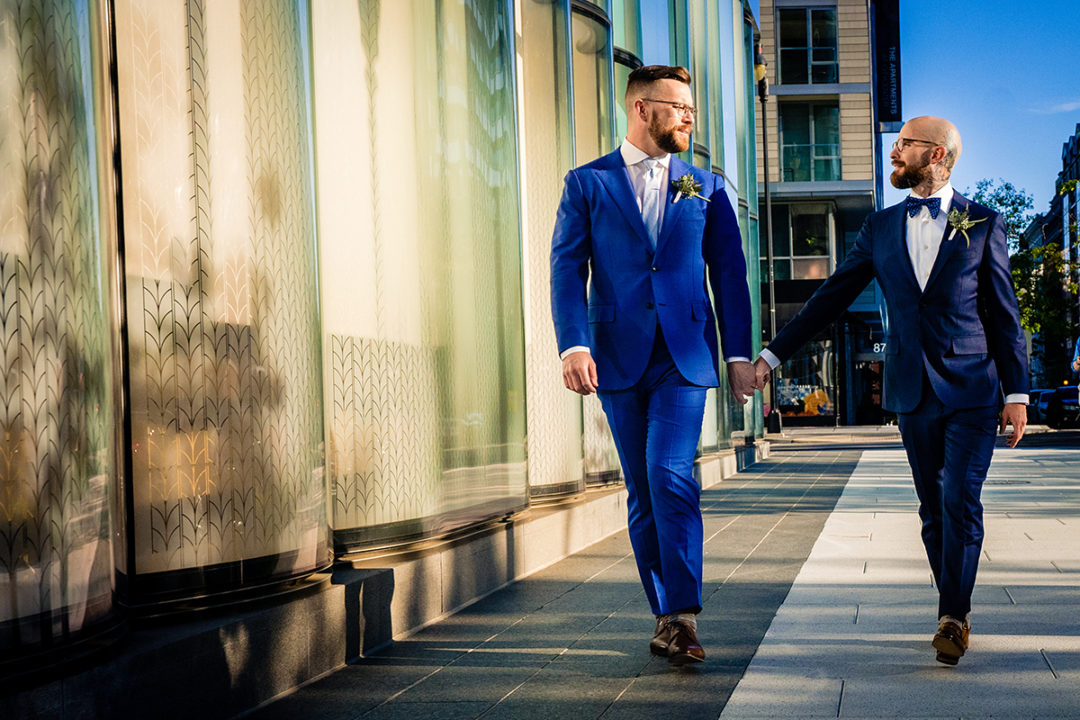 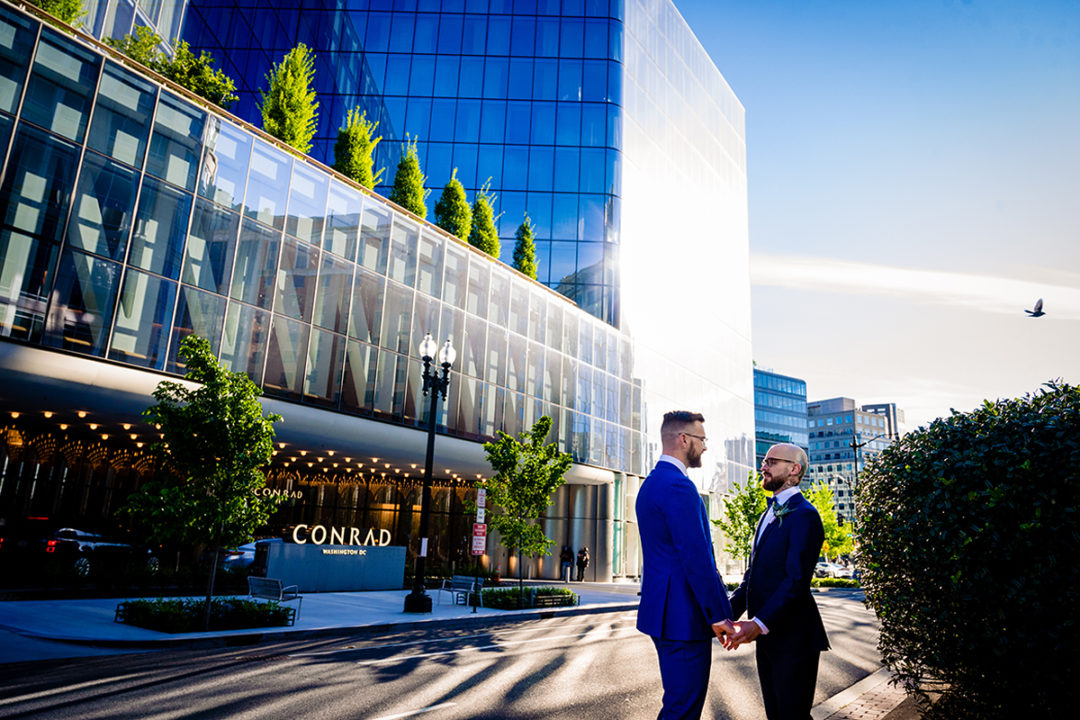 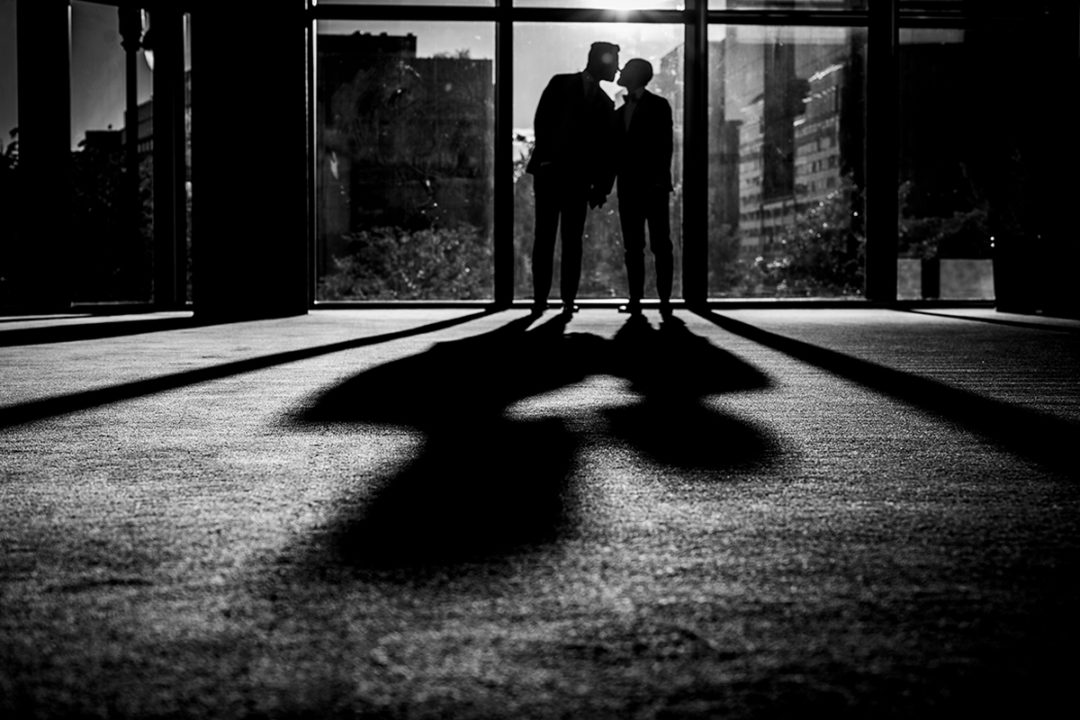 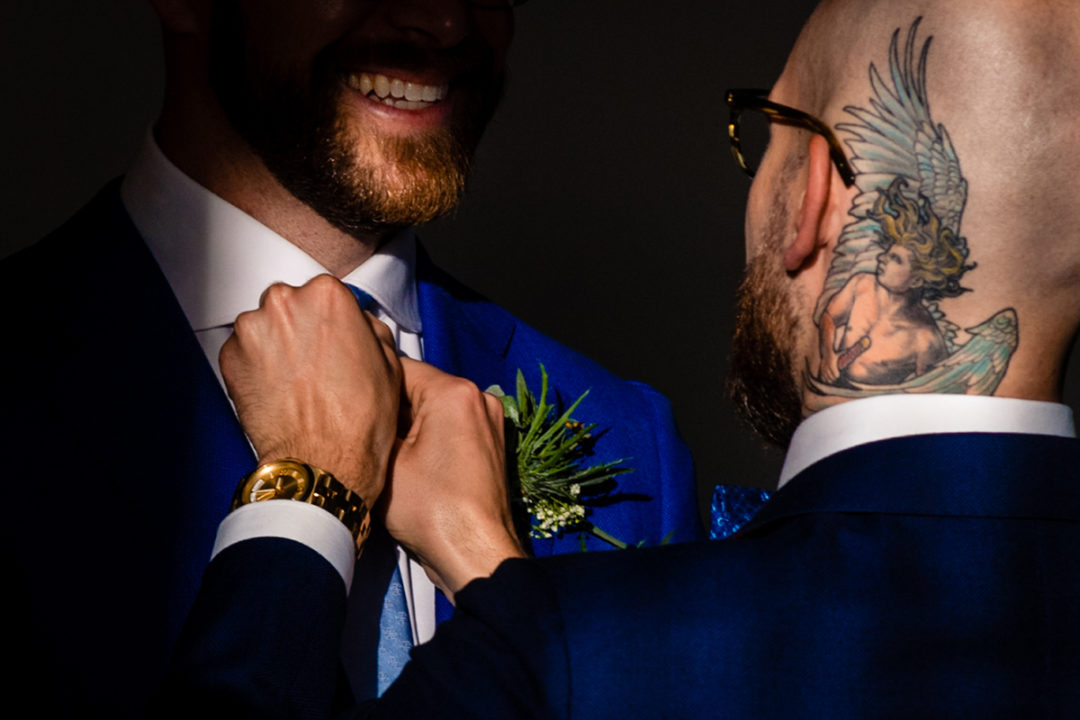 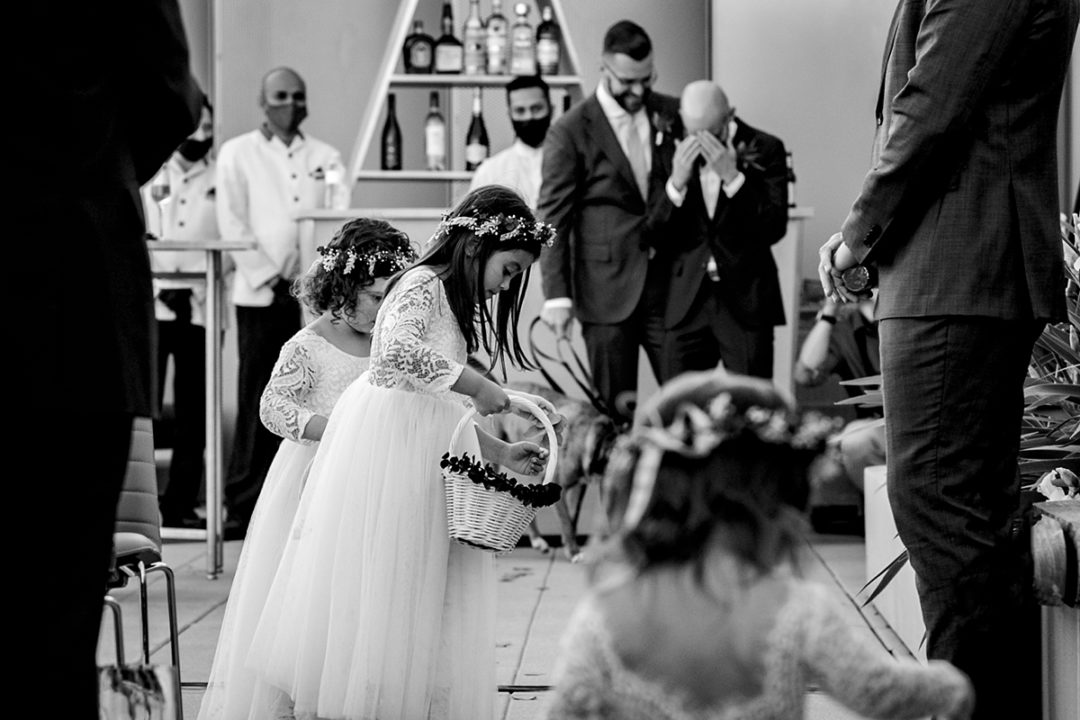 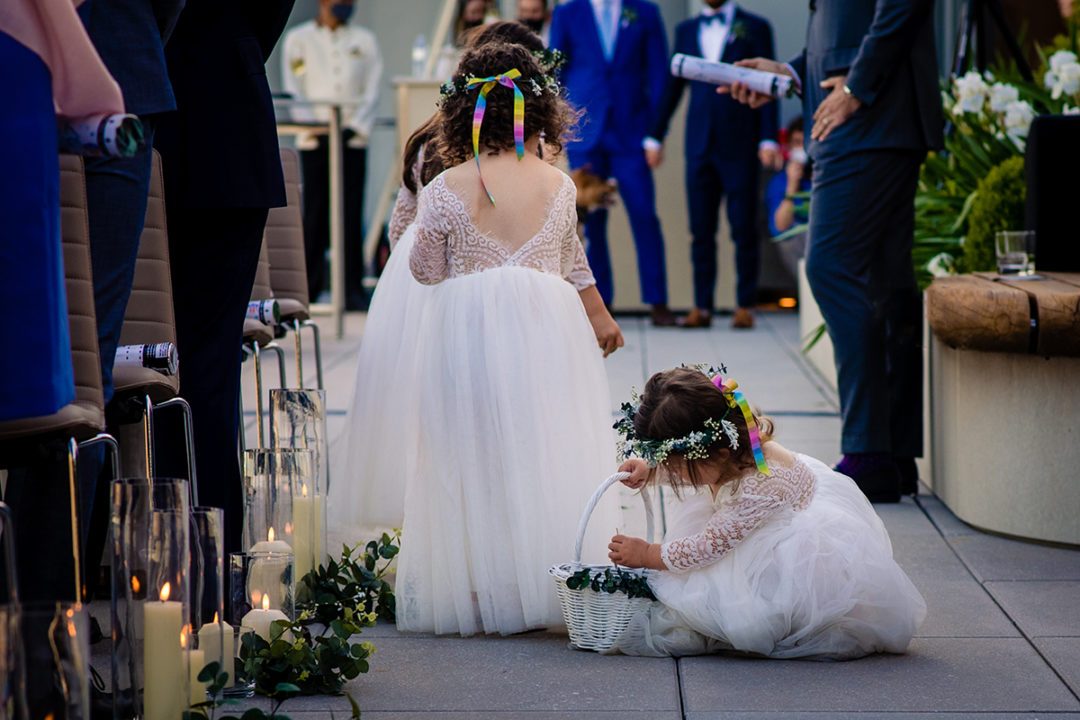 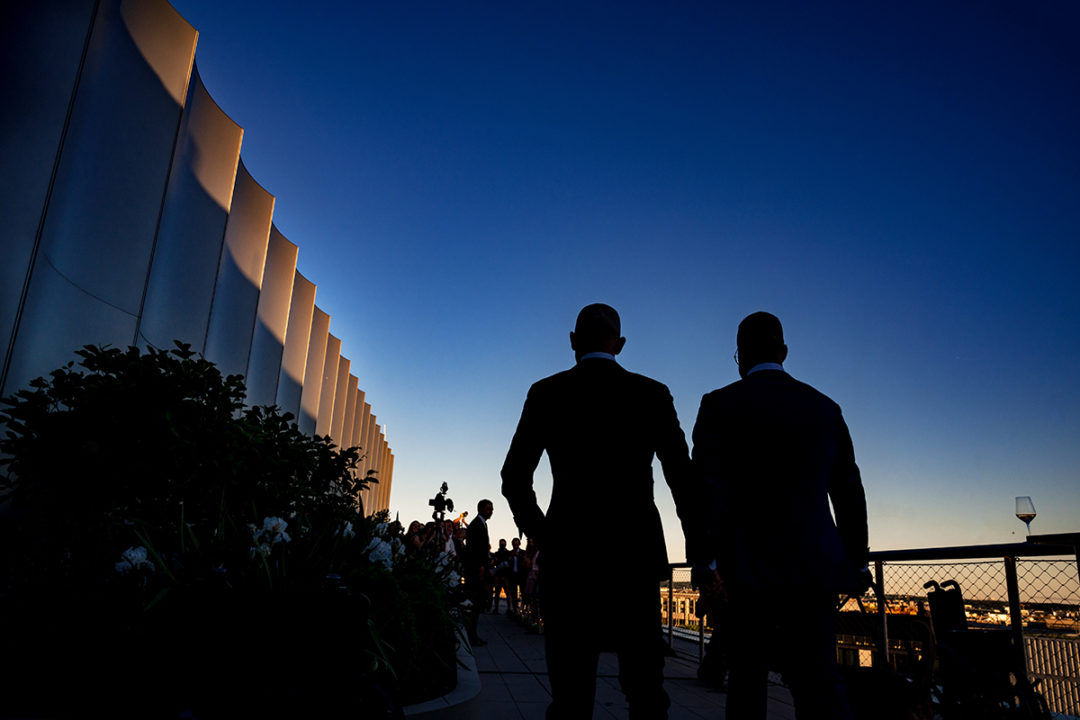 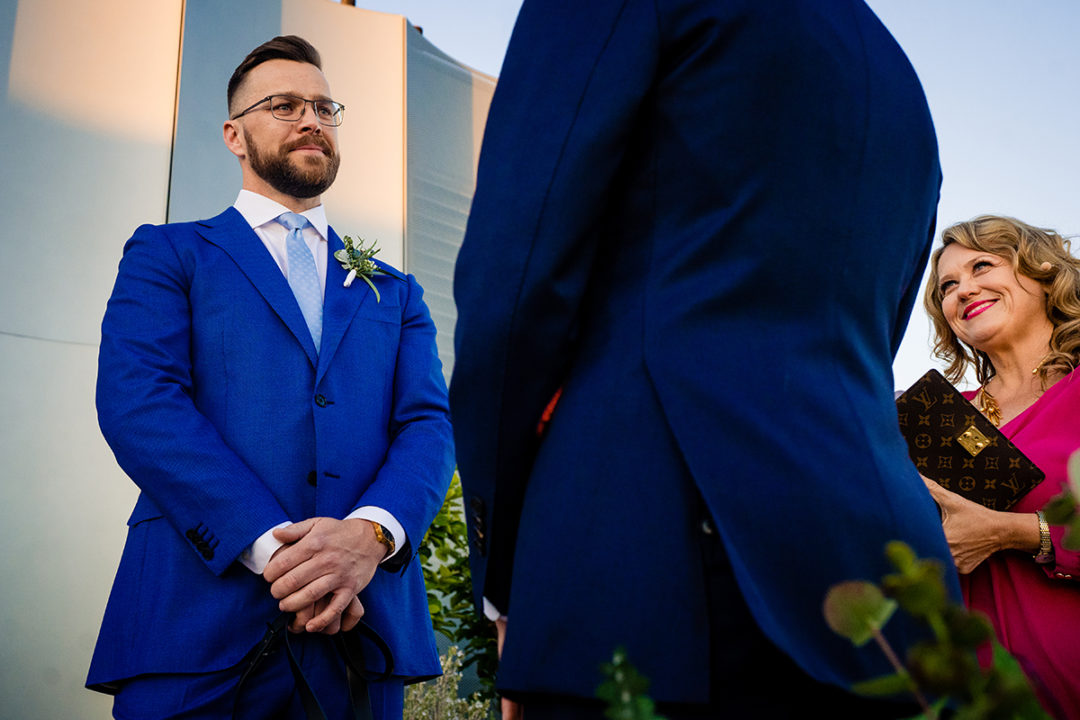 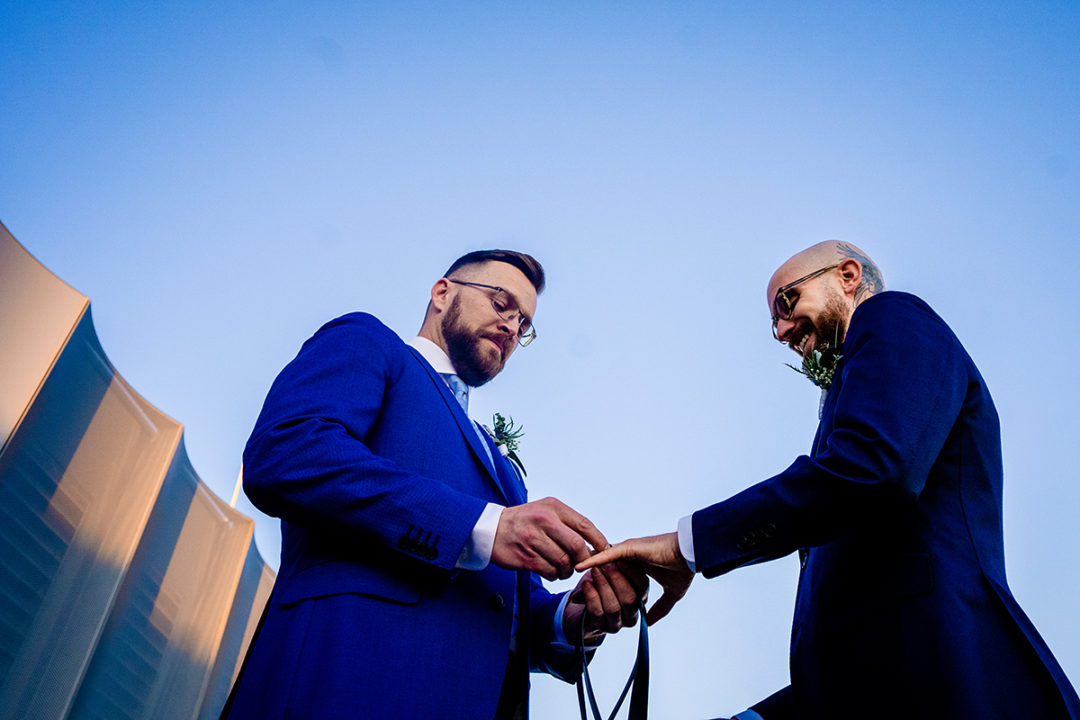 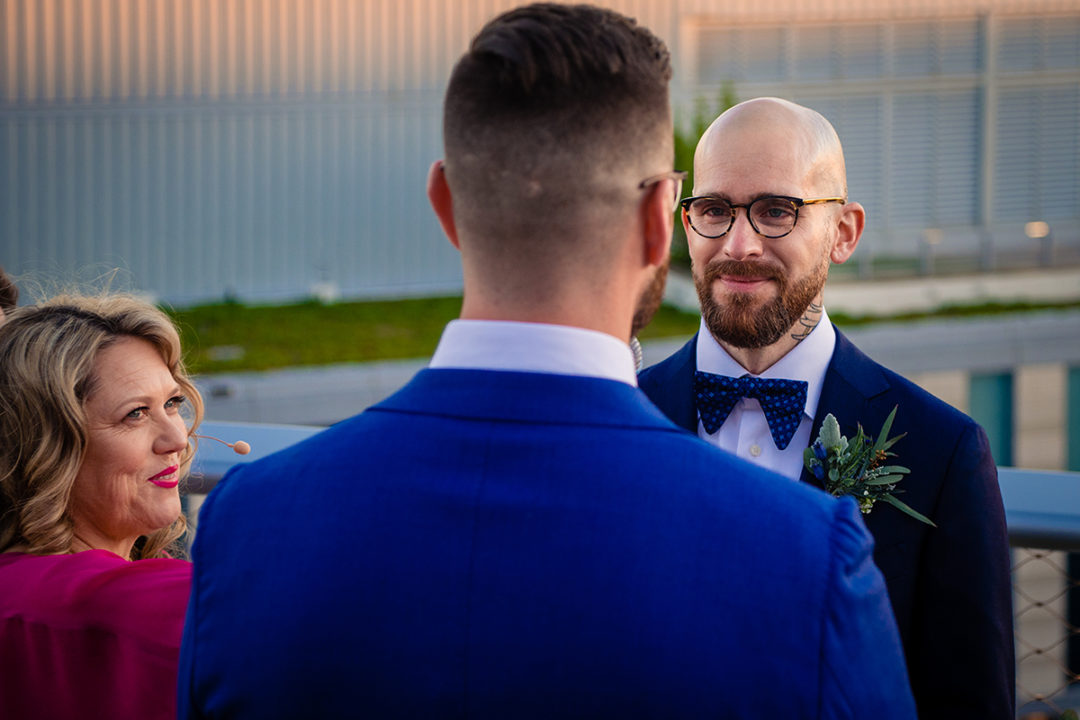 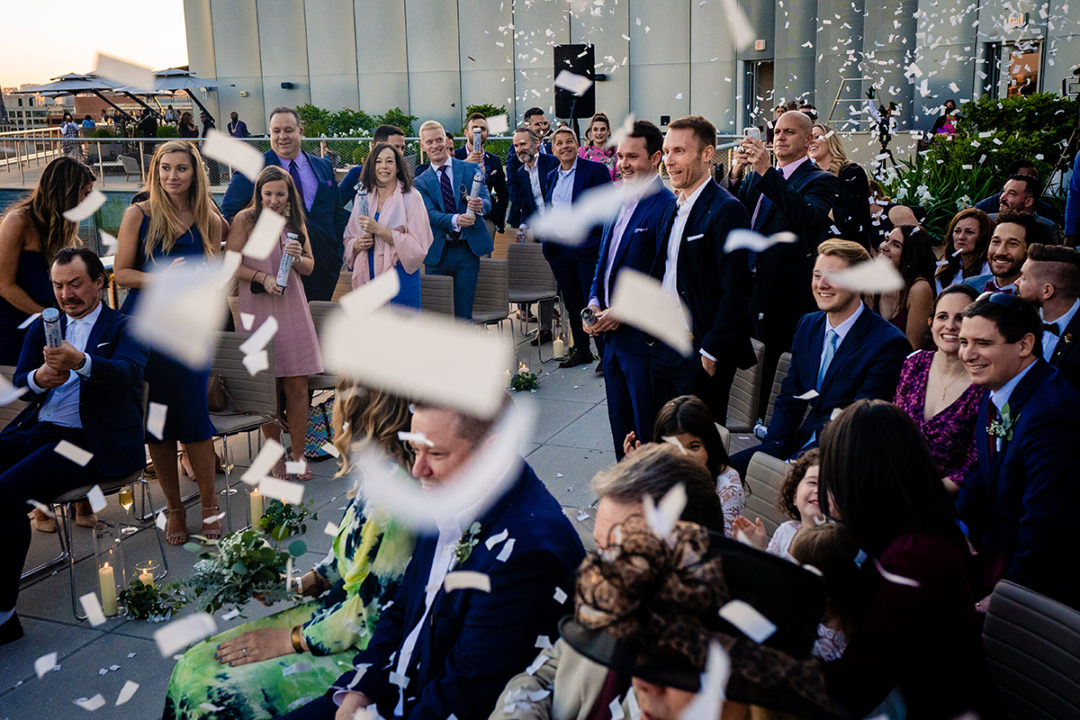 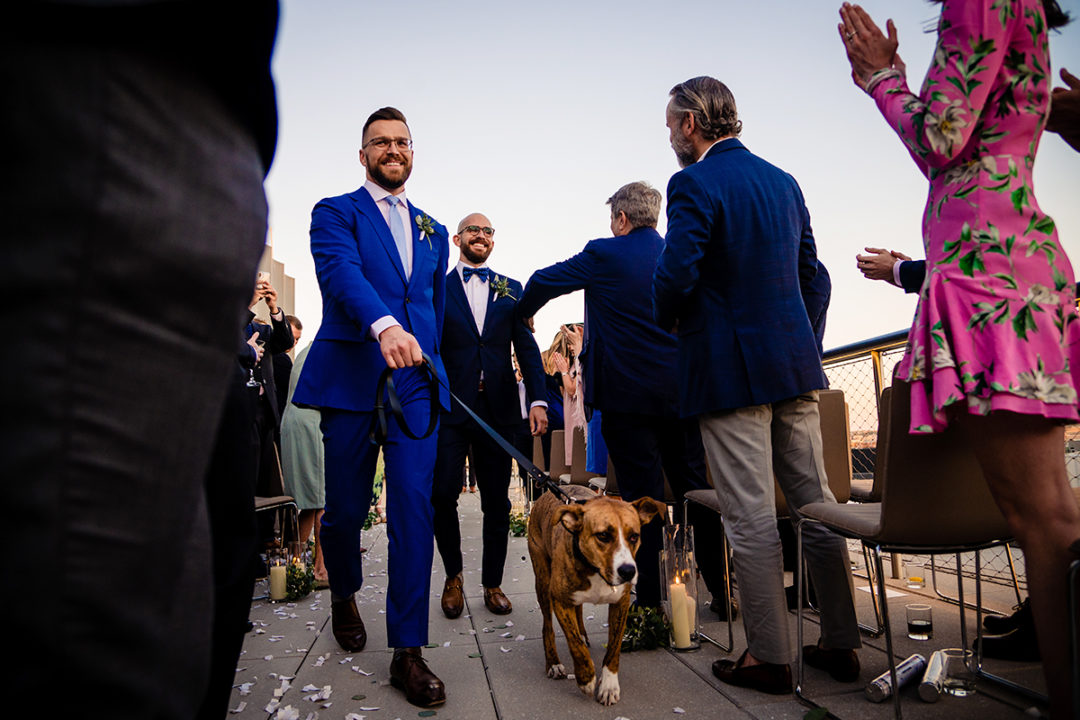 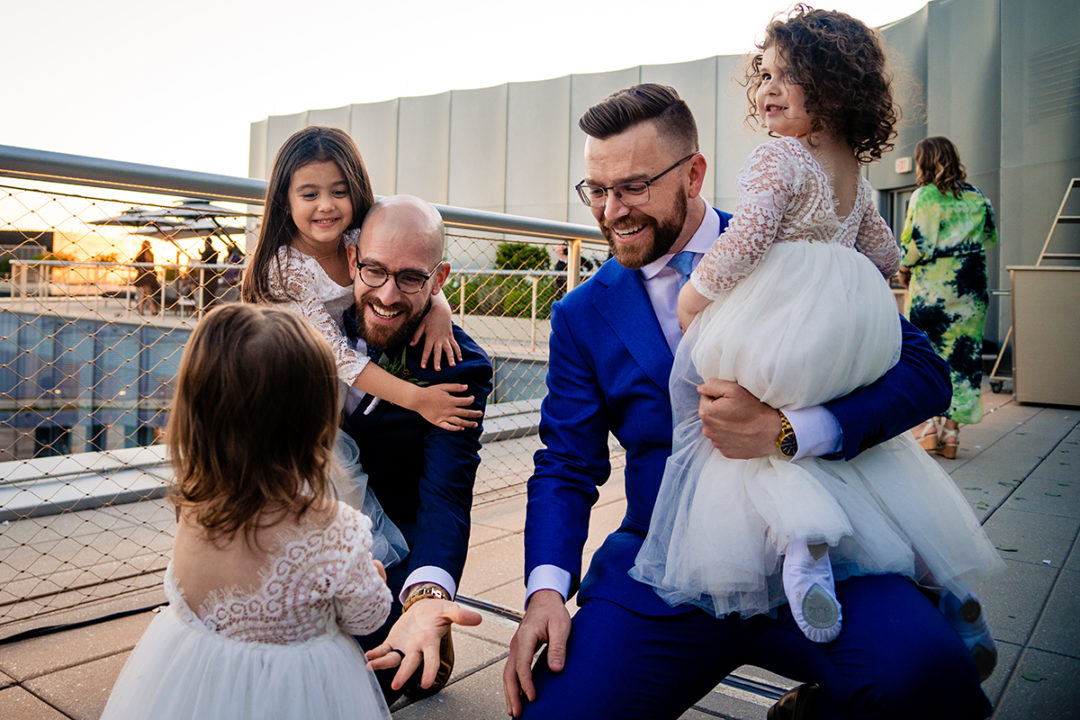 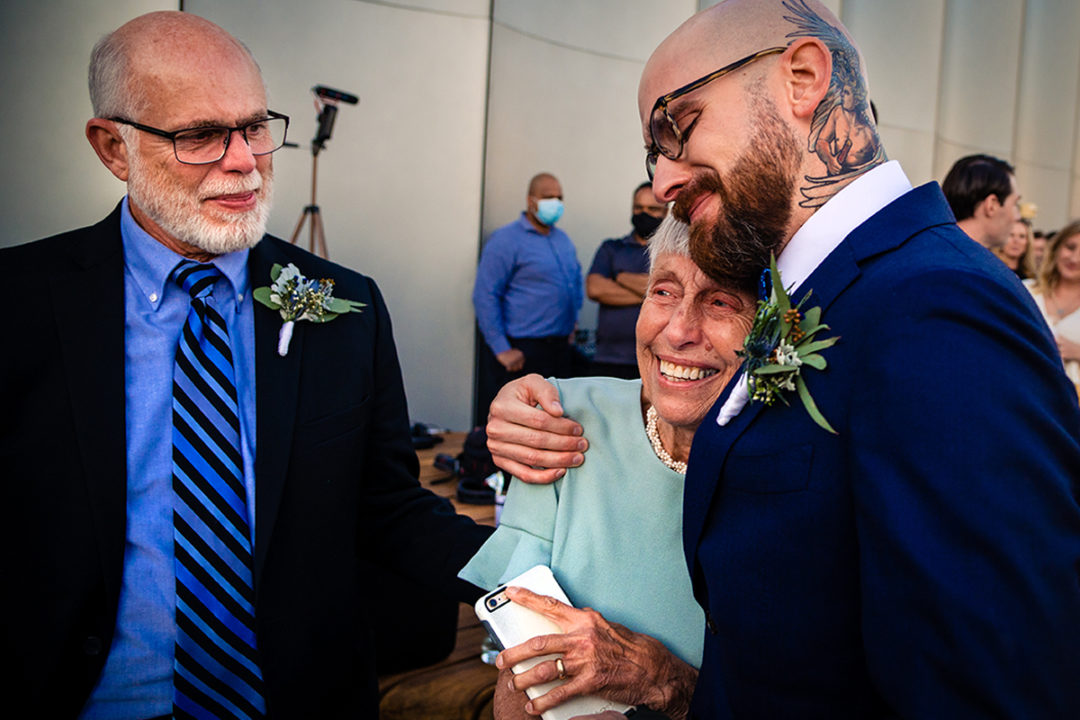